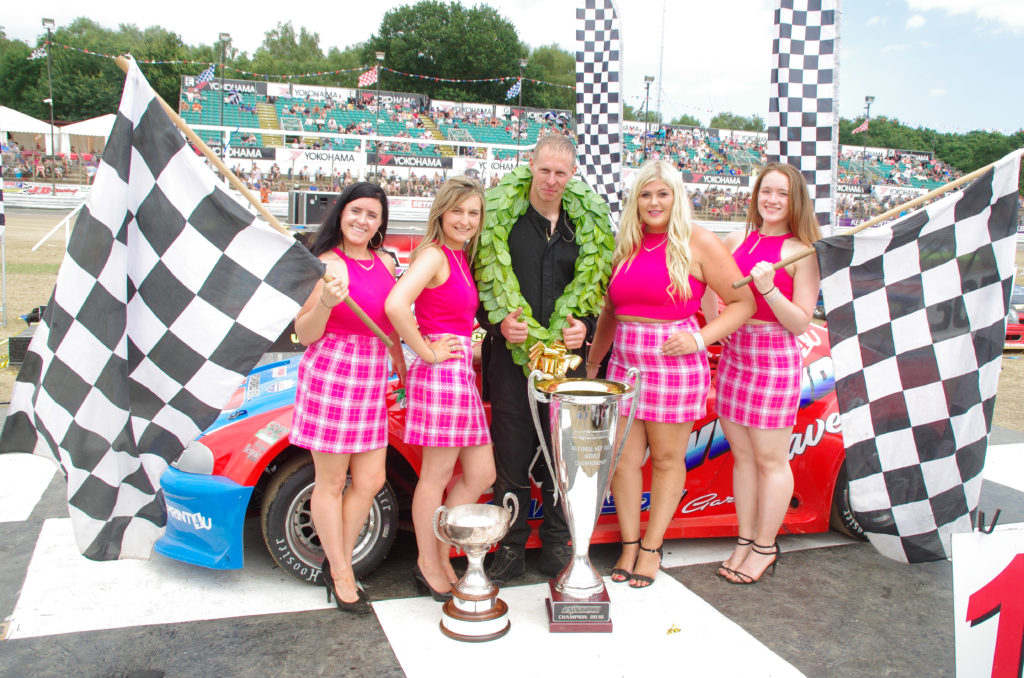 English points champion Bill Wood claimed his first World championship win following a dramatic end to the 75-lapper. For almost all the race pole sitter and 2012 Champion Glenn Bell had looked to be running away with it, but the Ulsterman succumbed to a jammed throttle just eleven laps from the end, sparking off a scramble to capitalise on his misfortune. Wood survived both a late race caution and stiff challenges from John Christie, Rob McDonald and defending champ Chris Haird to finally cross the line just about half a second ahead of Christie.

Although fancied by some to do well prior to the event, Wood’s chances of taking the top prize in the sport had looked little more likely after Saturday’s ‘hot laps’. Yes, he had done well to claim the outside of row two with an impressive 14.50s lap. But with former winner Bell on pole and Rob McDonald sat alongside – just as he was last year – a formidable barrier was already in place, and that was without Gary Woolsey’s Ginetta which would be starting alongside. More Ulster fast men in the shape of Derek Martin and John Christie were right behind, and with Adam Hylands on the next rank, there were going to be no easy wins on offer here. In fact with just 0.62s covering the entire grid, it was clear there wasn’t going to be anything easy about this race, especially on what was likely to be the hottest day of the year so far.

With Hot Laps having determined the starting order of 34 of the 35 starters, there remained just the business of deciding who would join the back of the grid as the ‘wildcard’.

Some typically robust speed weekend racing provided heat wins for Aaron Dew and Adam Maxwell, with Maxwell the hot favourite to take that last grid slot even before they did any racing. This he duly did in the final, leading virtually unopposed from flag to flag.

On this occasion the usual frantic first lap got no further than the first bend before it all kicked off. Bell made a slightly early break from the rolling lap with McDonald staying right with him. But behind them all hell broke loose. Billy Bonnar seemed to get too deep into the turn and collided with two other cars, sparking a multi-car shunt, with at least eight cars spinning into a dust ball. It looked a certain yellow or even red flag situation but, with neither appearing, the rest pressed on. Terry Hunn limped his Mazda away from the scene and was no doubt looking for a way onto the infield when the pack came around again and he got hit flat out by Woolsey’s Ginetta; that got the reds their probably overdue airing.

With so many cars having taken damage, a ten minute hiatus was sensibly declared for repairs. Only 14 cars remained untouched by mechanics and eventually, all bar three runners made it back into their grid positions. Woolsey and Hunn were definitely hors de combat and a groan went up from the crowd as Hylands drove disconsolately out of the pit gate having run out of time to replace a broken shocker.

Momentarily, the re-start looked like being an exact repeat of the first one as far as the front row were concerned, but this time Wood stayed much closer to Bell, forcing McDonald to stay wide, the Scot getting railroaded back to fifth before he could recover.

Danger still courted the leaders too, when some spinners on the back straight saw Bell anchor up sharply and only narrowly avoid getting rammed by Wood, but they all escaped unharmed.

After that the race settled down for many laps, with Bell always inching away from Wood, who was being tracked by Christie and McDonald after the latter had worked his way past Derek Martin. Martin also lost out to the hard trying Haird as well before too long as the reigning champ battled to get on terms with the leaders.

Eventually Bell began running across large groups of backmarkers, but the leader cut through the traffic serenely. The lapped cars were helping close the others up though and the places dice now had Wood, Christie, McDonald and Haird all in close proximity. All the while Bell was cruising out front however, this was still just the fight to be called first loser.

Half distance came and went with little change, although McDonald and Haird swapped places and then swapped them back again.

Then, with just eleven laps left to run, a big puff of smoke from Bell’s car made everyone look. It was assumed he had a puncture at first, but with all the tyres definitely still up, it had to be something else. In fact, the throttle had jammed on the #9, leading Bell to smash the brakes on – thus the puff of tyre smoke. He bravely tried to carry on, slowing the car with the ignition switch, but it was clear he wasn’t going to survive another ten laps like that and the placemen could see it.

That raised the intensity of the battle for second alright, as Wood and Christie tore down the home straight almost side by side at one point, and with the crippled Bell car just ahead, the others knew they were really racing for the lead.

Wood clung onto second, helped by a backmarker getting under Christie’s feet, and raced past Bell just before the erstwhile leader’s concentration finally failed and he spun, taking Paul Frost into the wall with him.

That brought out the yellows just seven laps from home, the line-up unusually placing the first five cars line astern with no pesky backmarkers in between them. They all charged away at the resumption of hostilities, with McDonald zipping past Christie down the inside as they exited turn three. Christie blasted back ahead along the back straight, McDonald came back at him, Christie went back in front again, taking Haird through with him this time….and all the while Wood was probably cheering them on in his mirror as he edged away a few feet, then a few yards to finally sweep past the chequered flag to claim the biggest cup for the first time.