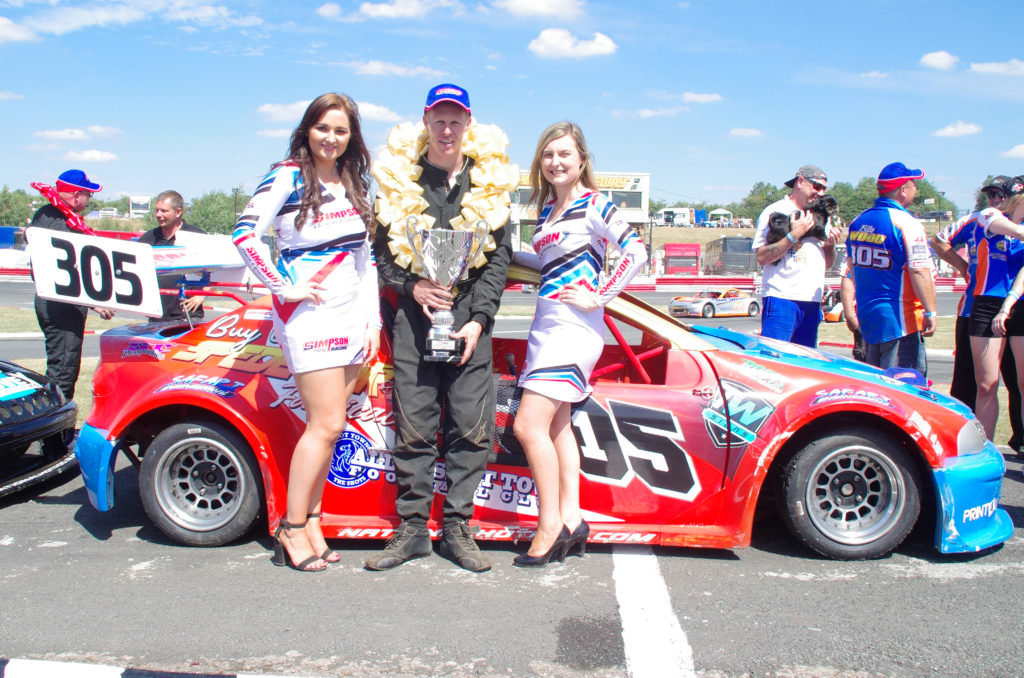 It has almost become traditional that the still-new world champion will take the National as well, but that expectation brings a degree of pressure for the wearer of the gold roof. Billy Wood proved equal to the task though, containing a lengthy challenge from Chris Haird and Shane Bland to lead every one of the seventy-five laps.

The opening heat was a battle between Adam Maxwell, Jack Blood and Shane Bland, Bland overtaking both men to lift win number one. Heat two was a flag-to-flag victory for Rob McDonald, chased home by fellow Scot Billy Bonnar.

Jason Kew relieved John vd Bosch of the lead soon after the start of the third encounter but then had to fend off Adam Hylands, the 2016 champion desperate for a result after crashing out of heat two. Kew soaked up the pressure however, and was still in front at flag fall.

Heat four provided a controversial outcome, Glenn Bell leading until forced to allow a hard pressing Chris Haird through. But Haird lost the win to the steward on a penalty while Bell’s joy was short-lived when he once again fell foul of the tyre logging rules, putting him out of the meeting and giving the honours to Kym Weaver.

The fifth race was another flag-to-flag job, this time for Carl Sloan, the main interest here centring on the places duels, Mark Heatrick defending for all he was worth to stay second ahead of Carl Waller-Barrett. The last heat looked to be a straight fight between Wood and John Christie, but Christie got stuck on the outside and railroaded backwards leaving Derek Martin and Gary Woolsey to chase Wood home.

Once Shaun Taylor and Podge McQuaid had annexed the final two places on the grid from the Last Chance race, matters were all set for Sundays 75-lapper.

Having qualified on pole, Wood was clearly poised to lift his first National title but there was plenty of opposition to overcome, with Bland alongside and Haird handily placed on row two.

Most of the truly vital action came in the first few seconds of the race. When the green flag came out it was Bland who just got the jump but, when he grabbed neutral instead of second, Wood surged ahead. That left Bland trapped in a three wide jam with Bonnar and Haird, the trio running a whole lap like that, Bland virtually rubbing the barriers all the way round. Their deadlock was finally broken when Aaron Dew went spinning at turn one, taking a number of others with him into a partial track blocking situation. It looked like an immediate yellow or even red flag situation but the pack had come around again and several other cars – seemingly oblivious to race control’s radio warnings – ploughed into the stranded machinery before the yellows finally flew.

With the race back under the green, Wood, Haird and Bland quickly broke clear to begin their lengthy battle. Their high speed dice left the rest trailing, barring Gary Woolsey, who doggedly tried to chase them down, drawing nearer and nearer to the lead trio. He still hadn’t reached them by mid-distance however, despite Bland gradually falling off the pace steadily thereafter.

In fact, with Bland dropping back, Woolsey’s charge having stalled and Haird having only barely saved his loose looking car from a near spin, it eventually became clear that everyone’s tyres had simply gone off with the searing heat and high speed pursuit.  Only Wood’s car seemed relatively unaffected and, despite Haird gamely trying to come back at him nearing the finish, the leader had drawn clear once more by the time they swept under the chequers.