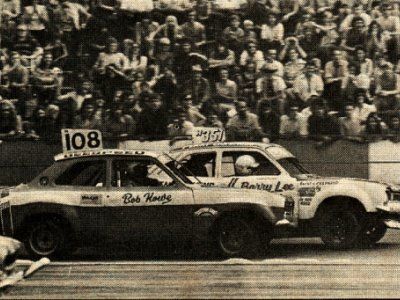 September 10th is memorable for me because it was the day the end fell off my cigar into my boot burning science fiction holes in my nylon sock and ravaging my person. It was also the day Spedeworth held their first World Hot Rod Chamionship, which is probably more important.

The event was significant because it was the first time that drivers from different organisations were invited to take part in one event, so perhaps at last a truly nationwide and international formula will evolve out of Hot Rod racing; which is certainly the most popular type of short-circuit racing at present.

The top thirteen points scorers from Spedeworth (England) were there, which of course included our own team drivers George Polley, Paul Smyth and Mick Collard, and Spedeworth Scotland sent their top five men. The place where it all started, Bill Morris’s Hednesford club, was represented by six drivers, and the Midland Hot Rod Club sent four; the line-up was completed by Denmark’s top three and two South Africans, and yet again Spedeworth’s incredible good-luck good-weather charm worked bringing the biggest-ever crowd to the Foxhall Heath, Ipswich, Stadium.

The day had started with time trials for a cash bonus, and Barry Lee put up the fastest lap of 16.5 seconds although not all the drivers took part, and in practice both Dave Elder and our Mick Collard blew their engines. This was a big disappointment for Mick who had just put in a brand new motor and who is suffering a streak of lousy luck. He didn’t even get a chance to use his new Revolution wheels.

After music from the band of the Royal Marines the programme got under way with a Hot Rod heat which was action all the way and which had the wives of the Danish drivers gasping in horror; they’d never seen English racing before and obviously imagined for their hubbies. Chris Brayley won it and Leon Smith got disqualified for nerfing, and this was followed by a stock car win for Alan Crane.

The next event is the one which always has me on edge, and how the drivers feel God only knows – the public draw for grid positions which despite all the experience, form and preparation can win or lose a big event for the driver if he gets a rotten place. On the front row for the 75-lapper came Melvyn Smith and Midlands driver Alan Smith. Behind Alan on the second row came Hednesford entry Brian Pedley – one of the biggest Northern threats – and behind him the smart new Mini of another big Midlands favourite Ken Deakin. BP/CC team drivers Paul Smyth and George Polley shared row four, Graham North and Barry Lee sharing row nine with all the Danes and most of the Scots behind them.

Due to the big line-up the usual clutch start was abandoned for a roller and on the green flag the field got away fast and tidy and the race was happening. The first laps saw the first four rows of the grid – eight cars – break away slightly in a tight bunch with Barry Lee moving up fast through the field. And then the inevitable action started. Pete Woodward’s Anglia was the first to go, hitting the fence hard; Midlands big hope Ken Deakin smashed into the safety fence after colliding with Polley’s Anglia, badly damaging his new Auto-sponsored Mini. South African Isaac de Jager’s Anglia limped on to the infield next, damaged after a collision, and Dave Bozzard hit the fence beneath the commentary box in his ex-Lee Escort. Dane Arnold Larsen spun his Renault but was quick to rejoin, and all this had happened within the first five laps.

Meanwhile it was Melvyn Smith in front from Brian Pedley and Bob Howe, and by the next lap arch favourite Lee was already in sixth and going strong. A couple of laps later Dane Carl-Erik Kristensen tangled with the Polley Anglia, but both rejoined the race quickly, and on lap fifteen the Escort of Barry Lee was out in front and making space. With the field still tightly bunched drama came on the pit bend as Hednesford driver Phil Pearce lost a wheel and half-shaft from his metallic green Escort; all eyes watched the lethal bits bounce down the track to be safely hooked over the safety barrier by a marshal.

Next to fall by the wayside were the Minis of Scot Ian Bruce and Dane Steen Gudmandsen, the worst soon followed by Malcolm Smith’s Anglia. Meanwhile Lee was forging ahead and the race looked as if it was his when MHRC driver Norman Humphries spun his Mini,right in the path of Lee’s fast Ford. But Barry avoided disaster and Humphries pulled out of the race, followed by another big name from Hednesford – Barry Kibble. As Lee asserted his position by lapping George Polley Jeff Cushing quit the race, and then trouble hit the leader. Barry pulled onto the infield and jumped out of the car to look under the bonnet, obviously expecting to find a plug lead adrift or some other small problem, fix it, and rejoin the race. (He would have been disqualified for this.) But in fact the throttle cable had broken, and Barry hurled, the bonnet lid, followed by his helmet, on to the grass and stomped off.

This was clearly a bitter blow to Barry who was really intent on winning the coveted World tag; all he could say afterwards was ‘I want to be alone ‘. (I could do with a loan). Back in the race Scottish star Les Kay clouted the barrier and Jeff Craythorn pulled out, but the battle for the lead was between Pedley’s Mini and Bob Howe who soon took the lead and started to open a gap. Our other team man Paul Smyth was next to pull out followed by Allan Smith, and by lap 50 Howe had opened a 3/-lap lead and lower down the field Derek Green, John Kirk (Scotland), Malcolm Goodman, Deryck Latimer and Carl-Erik Kristensen were moving up fast.

English star Micky Codling was next to go, soon followed by Kristensen who, thinking the race was only 50 laps, had run out of petrol. He topped up and rejoined. Polley was soon to be in trouble again when Kirk’s Imp spun taking George and Goodman with it, but both the English drivers got back in the race. Howe was well clear now but with fifteen laps to go his lead was down to half a lap and Deryck Armitage was approaching fast. But Bob opened up the gap again after frantic signals from his pit crew and came in to win the title – and his rear nearside tyre deflated as he crossed the line.

Armitage was originally placed second despite some protests as to whether or not he was second, but when the engines of the first three cars were torn down after the race for the usual check. his was found to be over the limit and he was disqualified. This put George Polley into second place, and even George was lucky to finish; his car was battered beyond recognition and with a broken oil pump too had oil all over the inside. Third place went to Melvyn Smith and fourth to South African Bobby Scott who had driven a great race in his first outing in a new car.

Later stock car races were won by Alan Crane and Marty Page, and Barry Lee won a heat and the Final, in which Kristensen’s Escort caught fire, the other heat going to Barry Kibble.

After the meeting Bob Howe threw a bit of a party in the public bar of a nearby boozer where the landlord was unbelievably tolerant. Champers flowed and darts flew and Barry Lee threw a Bacardi and Coke plus glass at me but oh what fun. No-one deserved to win the World title more than Bob Howe, and his win was popular with both drivers and supporters. Bob Howe is a man to watch next season and he plans to consolidate his sponsors’ Beespeed team really to put them on the map. F’rinstance the team is likely to boast the first Capri Hot Rod and Beespeed boss Alan Bee, who also runs a sharp Anglia rod, is planning production of a Ford-powered midget kit. 1972 World Hot Rod Champion Bob Howe is going places – and it ain’t just gonna be in circles.