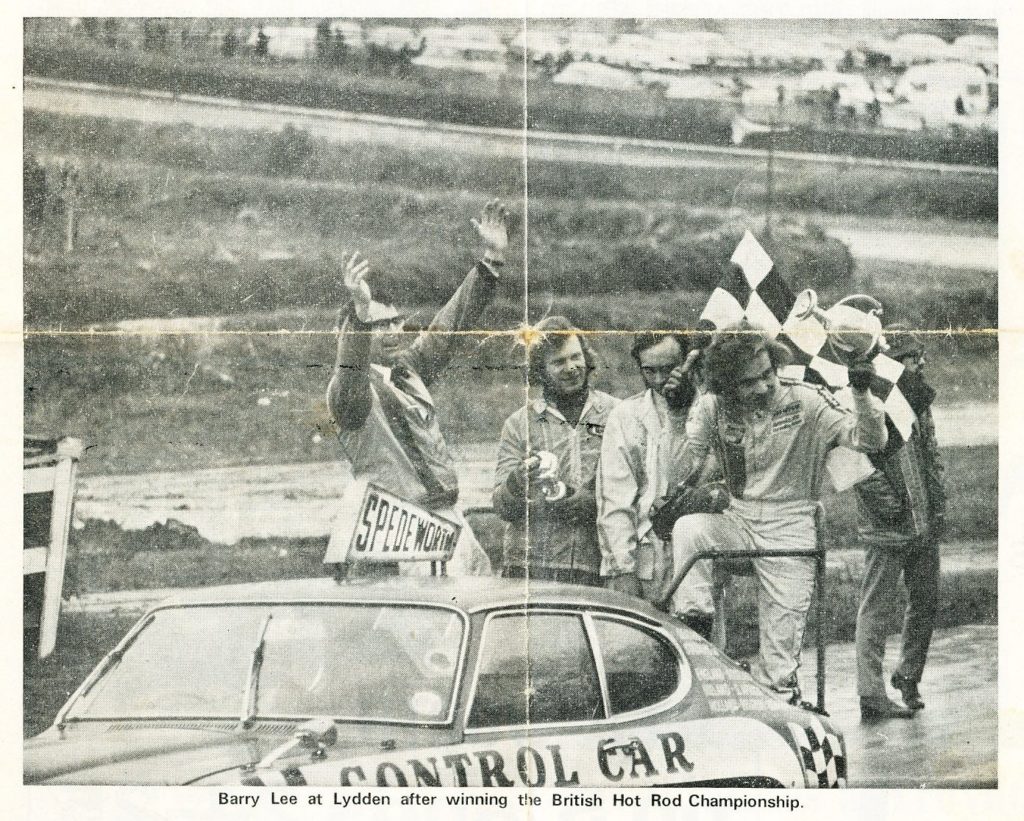 Lydden Hill on Sunday 12 November was the setting for the British Hot Rod Champiomship 1972. A truly British entry lined up for the start of the 15 lap race at the picturesque circuit near Dover in Kent. Thirty seven cars were at the start with seven from Hednesford Hills and two from Scotland, this promised to be the most hotly contested race of the season.

Grid positions were drawn by the drivers cormmittee and a representation from the other promotions. First two drivers on the grid were 33 Dave Miles. (S) and 242 Pete Stevens (H). At the other end of the grid were 19 Mick Collard and 15 Geoff Cowley. Messrs. Lee and Polley were side-by-side midway down the grid with Leon Smith 401 and Hednesford driver 118 Derek Armitage. Derek had his very rapid Chrysler powered Anglia. Amongst the other Hednesford competitors were 9 Brian Pedley in a 1440cc Mini and 222 Pete Edwards in a cross-flow headed big mill Mini.

Surprise of the day was Auto Enthusiast-sponsored 401 Leon Smith who appeared in a rather hot full race clubmans Anglia. From the same sponsorship stable, 267 Graham North blew a gearbox in practice and was unable to make the start, a great pity as Graham must have rated a hot favourite with a good position on the starting grid.

As the starter’s flag dropped it was 242 Peter Stevens who rocketed into the lead which he was to hold for four laps when through the field came the white Escort of one Barry Lee to take the lead that he was never to lose. Meanwhile, back with the place men. George Polley lying in eighth place tangled (for want of a better word) with one of the Scottish Hillman Imps in front of the control box which seemed to cause a misfire on the BP/ Custom Car Escort which proceeded on its way to finish in a lowly 9th place.

A rare dice was going on for 2nd place between 401 Leon Smith and 212 Phil Pearce, with Pearce in his genuine Escort hot rod holding at bay the Clubmans special of Smith. In fourth place after a scuffle with the other Scottish contender was 19 Mick Collard.

In the hot rod supporting races, it was yellow top driver Alan Miles 468 who won the first race from 151 Gordon Streeter and 189 Alan Leeson. Barry Lee really rubbed his victory in with the last two hot rod heats by winning them in fine style. With 468 Alan Miles and 366 Colin Reed 2nd and 3rd respectively in the second and 151 Gordon Streeter and 468 Alan Miles the place men in the last heat. No serious accidents to mar the day’s racing, but 135 who went into the banking at paddock bend backwards causing the seat to detach itself from its mountings.