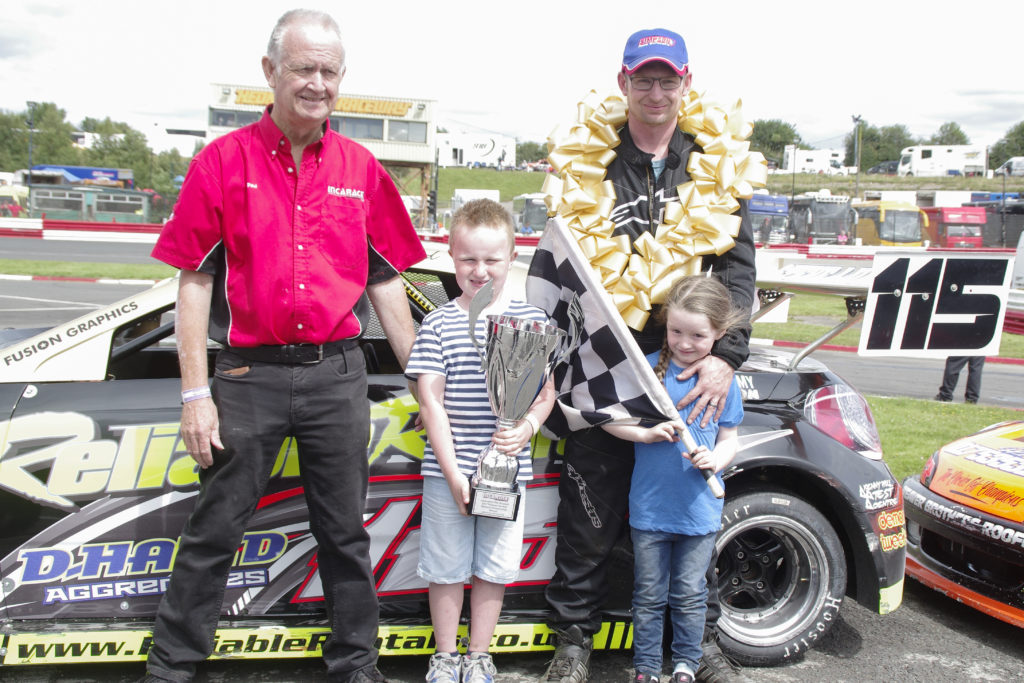 Graham Brown  Chris Haird carried on at the Nationals right where he’d left off at the World championships, taking another dominant and masterful victory in the 75-lapper. Qualifying on the outside front row of the grid, Haird passed pole winner Adam Hylands early on in the race and was in total charge from that point on. Defending champ Hylands eventually had to settle for third after Rob McDonald also followed Haird past.

Friday’s practice sessions had in fact pointed the way the title race would eventually go. The astoundingly quick (to say nothing of great looking) new Ginetta of Shane Murray topped the times for most of the afternoon, and that despite missing the first session altogether with a problem, until Haird sorted a minor motor bother and got his car dialled in, waiting until the very last lap of the last run to set FTD – a clear warning to the rest that they’d need to be at the top of their game.

Murray wasn’t the only Ulsterman battling car bothers in practice either, with Keith Martin breaking a link bar and having to be towed off backwards very gingerly, while Shane Murphy suffered a very smoky wheel bearing failure.

BTCC interloper Rob Austin started off pretty tentatively but was soon giving it a good go, despite the car looking a bit pushy turning in and loose coming off the turns – not the best combination. Meanwhile, his car owner was having worse problems, Mikey Godfrey’s Tigra B giving aggro with a seemingly incurable misfire which the team went to great lengths to cure.

A few late cancellations had dropped our 60 car entry to an eventual 55 but I never heard anyone complain about a lack of cars!

Saturday’s opening heat kicked off with Brendan O’Connell briefly leading before Simon Kennedy darted past into turn one, taking Shane Bland through with him. Bland had his hands on the lead by the end of lap two and that really was that as far as the destination of the win was concerned here.

Kennedy and O’Connell continued to lead the rest while Bland pulled quickly clear, ‘the rest’ being headed up by Rob Austin, who was giving a good account of himself until somebody rooted him out of the groove and he dropped four places in a trice.

As the race moved beyond half distance, Keith Martin managed to work his way up to and through the placemen, eventually to assume second and start trying to chase down the leader. But with the laps running out, Bland clearly tapped off and used up most of his half lap cushion by just cruising home.

Philip McCloy led heat two after a first bend clash with returnee Ralph Sanders and proved able to stay there until challenged by fellow Ulsterman Derek Martin, Martin hitting the front as they exited the West Bend and McCloy getting railroaded backwards as Jaimie McCurdy, Chris Haird and John Christie rushed past. McCurdy fell back as Haird went to the front of the bunch and got after the leader. It was Martin versus Haird with four laps to run but at that point the spitting rain turned into the real thing, the suddenly slippery track clearly suiting the leader’s car much better as he pulled clear again to win.

It was back to a sun-dried track for the third heat, where pole man Glenn Bell went straight into a lead he wasn’t to lose. But if that sounds like a dull race it was actually anything but, eventually building into the best race of the day.

Bradley Dynes ran second initially before losing the spot to Adam Maxwell, but from that point on Dynes clung onto his position tenaciously, such that the queue to have a go at him swelled to a 13-car freight train. Shane Murray stepped out wide to try it up the outside while Murphy got spat out of the pack and went spinning at the West Bend. Murray eventually made his pass stick, with Kym Weaver the next to try the outside line. He could not get it done and fell back, allowing Derek Martin to attack Dynes’ inside instead, he too making it past.

Murray swiftly caught Maxwell and easily by-passed the former world champ along the back stretch, suggesting Maxwell might well have a compromised set up – in fact he’d chosen to go with a full set of wets. There was no doubting Murray’s undoubted pace though and Bell was probably glad to see the chequers when he did. But in the end Glenn’s efforts were all in vain as he was soon to be disqualified from the meeting for a tyre logging infringement.

Heat four was slightly less fraught. Rob McDonald turned pole into an immediate lead with David Casey tracking him all the way. The Scot always looked to have the upper hand until they encountered traffic, whereupon Casey came rushing in, the pair exiting turn three locked together and McDonald battling to hold onto a big sideways moment. He managed it though, Casey took a (unacted upon) black cross and the pair carried on their dice all the way to the final lap, when the race was red flagged after Billy Bonnar’s car caught fire on the infield.

The fifth race saw Christie all alone on the front row, but that wasn’t going to hand him an easy win, with Ben McKee and Murphy piling on the pressure right from the off, the 962 Fiesta getting jostled throughout much of the opening lap. And when Adam Heatrick, Haird and later Billy Wood all joined them, this became a battle royal.

Haird shot up the outside, relegated Heatrick, and was ahead of Murphy too, briefly, before Murphy struck back. Then the leaders were all forced to lift for a second or two due to an incident involving some backmarkers immediately ahead of them down the home straight, putting Wood back in the frame, as Haird moved outside of Murphy. This was one of those races where it all finished far too soon, with Christie heading them all over the line, and Murphy just and only just holding onto second in a near dead heat with Haird. Once again however, some good work was all going to be wasted, as Murphy was targeted for a spot check on fuel non-return valves. His car was found wanting, spelling the end of the meeting for him.

The last qualifying heat featured a false start when Ulstermen Gary Wilson and Heatrick tangled into turn one, causing multiple collisions and bringing them all back for another try. Another false start ensued before they got going for keeps, with pole sitter Adam Hylands blitzing away but not fast enough to ditch the ever-impressive Chris Crane. Hylands’ car was exhibiting clear signs of damage from his encounter with Wilson and he was probably lucky to make the re-start, a large lump of bonnet missing altogether and the rest waving about in the breeze whenever the car was under the hammer. Nevertheless, the rest of it appeared to be working just fine and he gradually pulled out a scant lead out over Crane, the pair taking the flag still in that order.

Saturday’s proceedings closed with a relatively uneventful ‘last chance’ race for everybody who’d failed to qualify outright, which should have put Aaron Dew and David York onto the back of Sunday’s grid. In the end Dew wasn’t fit to run and neither was the next man home – Mark Heatrick – leaving an unusually lacklustre Jason Kew to take up the remaining grid slot.

Haird may have had a front row start but the quality of the cars around him suggested he was going to have plenty of work to do in order to achieve the ‘traditional double’ of adding the National to his World title. And chief among the possible stumbling blocks was surely going to be the pole sitter and defending champion Hylands.

It was Hylands who got the jump – just – at the green flag, but it was all to no avail as Jeff Riordan spun at the West Bend, several cars running into either him or each other to set the yellows flying.

The single file restart saw Hylands still leading Haird, McDonald, Christie and Derek Martin. Along with David Casey, this lead bunch were very soon drawing clear, at which point it became time to sort the probable victor amongst themselves. And when Hylands somehow left a tad too much daylight down his inside at the East Bend, that and a bit of rubbing were sufficient to put Haird into the lead. The news got worse for Hylands too as McDonald, following in Haird’s wake, went second a lap later.

With Haird already beginning to stretch his legs and McDonald, Hylands, Christie, Derek Martin and Casey tied together in their almost race-long places fight, it wasn’t long before it became pretty clear that no one else was ever likely to be able to get on terms with this gang of fast movers – with one possible exception.

Martin had just managed to sneak down Christie’s inside at turn three when a further caution period for a couple of cars stranded in dangerous spots naturally closed the field right up, bringing all the lesser placemen much closer to the front runners, even allowing for some intervening backmarkers. One of the cars languishing down the order was Shane Murray, a non-finish in one heat having hurt him pretty badly in terms of grid positions, the new Ginetta having started from 17th spot. But by the time of this stoppage he was already through to ninth and now much better placed to progress further.

With the race back under the green flag they soon passed the halfway point and, while Haird got busy leaving everyone behind again, many experienced watchers’ eyes settled on the #70 car as it relegated Layton Milsom to go eighth before out-fumbling Chris Crane (driving a pretty good race himself) around a backmarker to make it seventh. It was going to take a long time for Murray to claw his way up to Casey, and he really desperately needed another yellow which was never going to come.

By the time the 5 Lap board was out Haird was over a quarter of a lap to the good. McDonald was secure in second, while Hylands had a big slide at the East Bend nearing the finish which somehow still didn’t get Martin and Christie past him and then, with the flag almost in sight, Murray finally caught and passed Casey.

After the finish, it transpired Haird had driven virtually the entire race with both left side wheels badly bent and his tracking at least slightly deranged after a brush with the wall very early on. Without that handicap, one can only speculate just how far in front he might have finished.

With the main event done and dusted, 30 of the remaining cars lined up to do battle for the NHRPA title. The draw had placed York at the exact opposite end of the grid from where he’d started the National and he duly led them away, fending off first corner pressure from Carl Sloan, Billy Wood and Maxwell. Wood was looking pretty sharp here though, passing York shortly before a brief interruption for a caution, before proceeding to pull clear of a places scrap which soon involved Christie, Haird and Milsom, who all relegated York.

Haird worked his way into second pretty swiftly and was catching the leader too, but ultimately ran out of laps in which to mount any kind of meaningful challenge to Wood’s lead. Billy’s new red and blue colour scheme (think Richard Petty STP Plymouth circa 1972) looked absolutely superb, and even better when putting in some excellent and smoky celebratory doughnuts after the flag.  GB