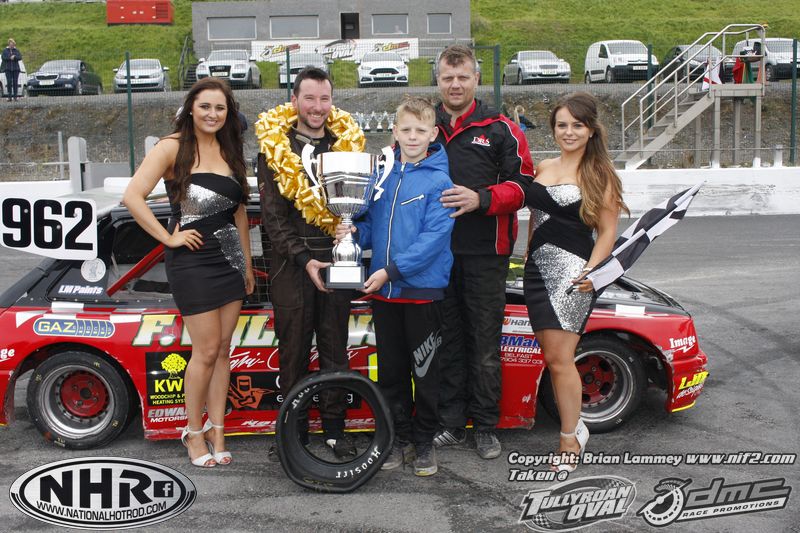 Darren Black:  John Christie completed the National Hot Rods Grand Slam at Tullyroan Oval over the weekend of September 2nd/3rd, finally adding a British Championship triumph to the World, European and National Championship titles that already adorn his CV. Over two tough days of competition John was pushed all the way by World and National Champion Chris Haird, whilst the other major title on offer, the coveted Leslie Dallas Memorial Trophy, fell to Glenn Bell for the third time in four years.

In the end just 22 cars rolled into the pits, as we unfortunately lost a number following a fraught Bank Holiday meeting at Ipswich and some locals too. What we did have was top heavy on quality though, with the local challenge aided by the return of Bell after his recent suspension, and also fellow former World Champion Adam Maxwell having his first home outing in three months. England were represented by not only 2017 form man Haird, but also NHRPA Champion Billy Wood and recent graduate to the Nationals Chris Crane. Chris of course is no stranger to the Ulster ovals, following many visits in the 2 Litre Rod over the years. Bradley Dynes was another welcome entrant from the English series, but does he count as a visitor when he lives just down the road? Robert McDonald represented Scotland, whilst Les Compelli and Ulster debutant Sean Kenny made the trip north from the Republic of Ireland.

After a very strict drivers briefing, hopes were high for some good racing on the fast Tullyroan bowl, but things couldn’t have got off to a worse start. In a bid to avoid the slow starting Kenny, Derek Martin veered left off the line but only succeeded in turning Compelli across his bows. Compelli and Kenny then spun off in different directions, with the oncoming pack left with no chance to avoid them. Keith Martin sustained damage that finished his weekend, with Crane and Andrew Stewart also involved too. D Martin took an early bath for his part in the incident, with Christie leading them off at the restart ahead of Haird, Wood and Adam Heatrick.

Having challenged hard on Christie’s outside, Haird dropped into second, with A Heatrick demoting Wood after Billy made the slightest of errors into turn one. Behind the leading four a fierce battle was developing between Jaimie McCurdy, Shane Murray, Maxwell, defending champion Hylands and Mark Heatrick. As Christie edged clear at the front, Bell and McDonald were now heaping pressure onto M Heatrick. Both had a look on the outside, but then Glenn got into the back of Mark into turn one, spinning the #960 Tigra off and earning himself a black cross which would unfortunately become a DQ after the race. Kenny and Conor McElmeel then clouted the turn three wall which earned Phillip McCloy the third disqualification of the race.

Up front Haird was back on Christie’s case as the laps ran out, but John held on for a great win over the World Champion, with A Heatrick again impressing in third ahead of Wood, McCurdy and Murray.

Unfortunately for defending champion Hylands an engine problem ruled him out of heat two and the rest of the weekend, so from that point on we were assured of a new name on the British trophy. McCloy and Dynes shared the front row of the reversed grid, with Bradley quickly putting some distance between himself and the pack as he settled in on his old stomping ground. Bell made a bid for second down the inside of McCloy’s Peugeot, Phillip soon rotating and being clipped by McElmeel which brought out the yellows.

Dynes, Bell, McDonald and Maxwell led them off at the resumption, quickly joined by Murray’s Ginetta. McDonald made what looked like an audacious attempt to get right around Bell and Dynes, only to be blocked by a backmarking Kenny. As M Heatrick, McCurdy and D Martin joined the train it was becoming breathtaking stuff for sure, and McDonald then hit the outside once again and this time pulled off the move that grabbed him the lead. The opportunities may be limited at Tullyroan, but this was driving of the very highest calibre from the Scotsman. Just as Robert took the lead the yellows got another airing with Murray wedged hard in the wall on the exit of turn four. It was an incident which initially kicked off on the entrance to turn three, and Maxwell was the unfortunate one to cop a disqualification this time.

Once they got going again McDonald raced clear to record a very creditable victory indeed, with Bell just unable to make it past Dynes for second after trying for lap after lap. Mark Heatrick went for a home straight spin late on, whilst Bell dropped right back off the pace for some reason within sight of the flag. As McDonald celebrated with the chequers, Dynes, McCurdy, A Heatrick, Christie and Haird filled out the places.  DB

Ed Fahey:  An undersubscribed entry and two less than clean qualifying races the previous evening saw John Christie on pole for the main race with Adam Heatrick alongside. Right behind were Jaimie McCurdy and Chris Haird, who despite struggling with a mis-firing engine was still very much the man to watch. Certain drivers had only managed one race finish the previous night which affected their qualifying positions somewhat.

Christie led from pole, but Haird was not waiting and had slid into second past Heatrick before long and stayed for almost the entire race within striking distance. Behind them Adam Maxwell, Derek Martin and Glenn Bell had made strong starts and were surging forward, only to be baulked by Billy Wood, who was struggling to keep his position with a possible misfire ahead of the fast trio. Les Compelli was unfortunate to brush the wall and the first into retirement with damaged steering. 10 laps in and Haird was right on Christie’s diff and really applying pressure, but try as he might, he just didn’t have enough to pass. Wood eventually lost his grip on sixth position allowing Maxwell, Martin and Bell through, as just ahead Rob McDonald pulled off another fine outside pass on Adam Heatrick to take third position.

As the leading pair stayed no more than two car lengths apart Jaimie McCurdy caught up with third place Heatrick but just not close enough to make a pass.  A queue was now forming behind fifth position Bradley Dynes; Maxwell, Martin, Bell and Wood, who was just managing to hold on ninth position. Dynes then got railroaded back losing four places and showing how much of a stout defence he had been making. Further up, McCurdy was now locked onto Heatrick but the Tigra B would not be shaken that easily.  Wood unfortunately pulled up at this stage after a gallant effort against Northern Ireland’s finest.

At the half way point the order was: 962 115 342 199 117 76 20 9, and the race settled a bit after this point with the top five cars tightening up a bit.  Haird was getting very close to Christie again with an occasional love-tap, but not enough to get past; was it engine issues or a lack of local knowledge holding him back?  A final lunge by Haird around the outside with two laps to go just didn’t have enough either. McCurdy ramped up the pressure again on Heatrick, but try as he might, he could not make the desired move into third position. As the laps wound down there were no big changes to the order, the lack of cars to begin the race with meaning there were a few less to end with and everyone had a bit more space to race. Christie took the flag in front of his massive group of supporters, and did his now customary dance exiting turn 2. Haird finished a gallant second and who knows what might have been had the misfire been a bit less intermittent. Heatrick finished on the podium after a fine drive, perhaps a little hesitation at the start, but then again with two of the most aggressive drivers beside and behind you, it was never going to be easy…

After the race Christie freely admitted that the outside line was to one to have and easier to defend, but reckoned Haird had the faster car, which made the effort with the ‘Antiques Roadshow’ even better. Haird was happy to finish in second, but Tullyroan’s mostly ‘one line’ layout made it hard to pass. Heatrick was happy with his position, carrying damage from the previous night, but felt that local knowledge certainly proved useful.

The reverse grid British Revenge race saw Andy Stewart lead off from a clutch start with Chris Crane alongside.  Crane’s initial good start came to a quick end when he cut across a rapid Derek Martin and into the grass as a result. Kenny McCann’s good start was cut short also, rammed quite hard into the grass by Dynes in a move more suited to Stock Cars than Hot Rods – Dynes disqualified as a result. Up front it was Bell, Martin and Maxwell with McDonald and Wood in pursuit. Bell and Martin then pulled a decent gap on Maxwell, with early leader Stewart down to seventh ahead of Christie, McCurdy and Haird. Like the previous race it quietened a bit, the only major change occurred when Stewart ran wide which allowed McCurdy, Haird and Heatrick through. Bell took a comfortable win, ahead of Martin, Maxwell, McDonald and Wood.

The final race was for the Leslie Dallas Trophy/Four Nations Cup Round 3and the grid was:

On results from the two races of the day, Bell and Martin occupied the front row with Heatrick and Christie behind. A few more drivers called it a day at this point, notably Haird but there was still enough interest on the grid.

Another clutch start saw Bell leap into a strong lead but he had company with Martin, Heatrick, Christie and Maxwell not far away in that order, Christie and Maxwell scrapping hard for fourth position. A good sixth place battle also was raging between Crane, McDonald and McCurdy, McDonald under immense pressure from McCurdy which Crane got caught up in slightly with the battle being both tight and relentless.  McDonald would later be docked two positions for unnecessary contact on Crane. Unfortunately both Wood and Crane pulled up almost simultaneously which gave everyone else positions and a bit more space on track. The order settled a bit as the laps counted down, Bell well ahead of Martin with Maxwell in third place, Christie had been fourth at this stage but then slid down the order after a clash with Maxwell.

Glenn Bell held on to take the Dallas Trophy for the third time, ahead of 2016 winner Derek Martin. The lower than expected numbers affected the quality of racing somewhat.  Is it a case of some being uneasy about racing on home turf with some of the fastest drivers and cars the sport has to offer, rising ferry costs or damage repairs?  Whatever it is it needs looking at, as it’s a well known fact that if you are fast around Tullyroan, you will be fast anywhere else too.  EF