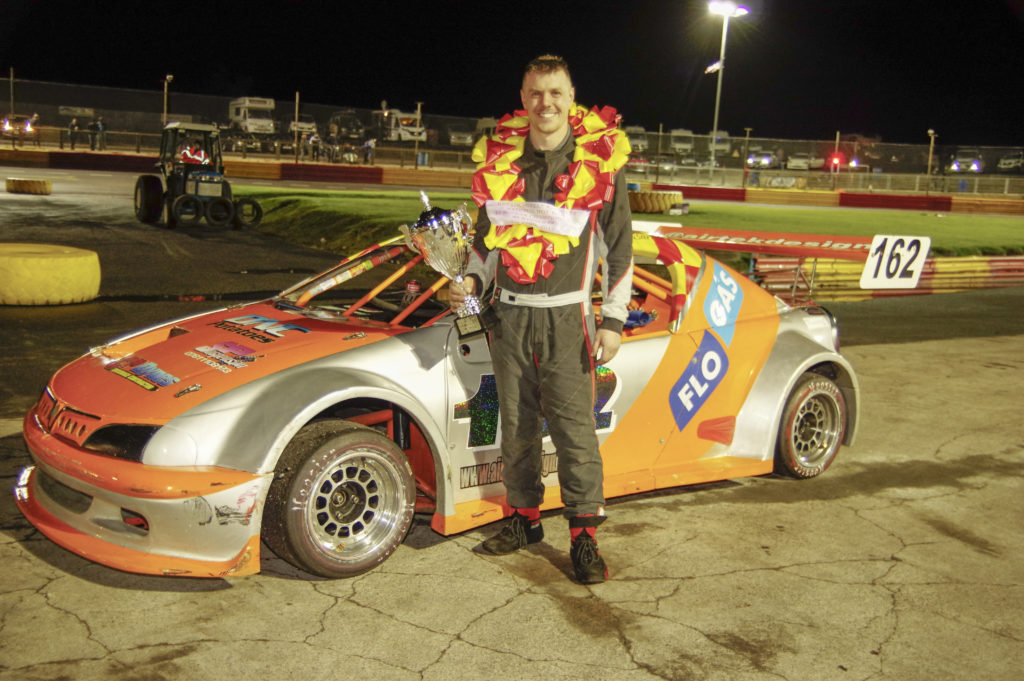 Carl’s Euro double and McDonald does it again

Martin Kingston reports:  Carl Waller-Barratt retained his European Crown at Lochgelly on Saturday night and joined an exclusive club of just  five people (Barry Lee, Pete Winstone, Pete Stevens and Keith Martin being the others) who have won back to back European Championships.  A very healthy 33 car entry with cars from England, Scotland, Northern and Southern Ireland, Germany and Holland drew positions for the reverse 2/3 heat format to decide the European Final grid. The entry also saw Jamie McCurdy race his new Ginetta for the first time.

Former European Champion John Christie had drawn pole for the opening heat, with Shane Bland alongside.  These two circled side by side for the first couple of laps until Christie had bit of a moment and Bland seized his chance to grab the lead, with Weaver following through, Mark Heatrick being an early spinner.  Christie and Jason Kew fought for third just behind Weaver while further back Adam Hylands and Derek Martin had a race long battle outside of the top ten.   Bland took a comfortable win, however he was dropped two places after the finish for his move on Christie handing the win to Weaver, with Christie second .

German Winnie Holtmanns led them away for heat two but was soon overtaken by Shane Murray and Adam Hylands, soon to be joined by Martin and Rob McDonald.  As the leading bunch caught up with the backmarkers, including Waller-Barratt, they all bunched up together with Murray and Hylands suddenly spinning out, Hylands getting stuck on the kerbs on the exit of turn four and the yellows were out.  At the restart McDonald led them away followed by Martin, Chris Haird and Glenn Bell which is the order they finished in.

A heavy shower before heat 3 saw it wet enough for wet tyres.  Waller-Barratt had pole for this one and led them away from Maxwell.  A couple of spinners in front of the leaders on the back straight saw Maxwell nip through for the lead and carry on to take the flag followed by Mark Heatrick – who was rapidly catching him in the closing stages.  However post-race penalties saw Maxwell issued a technical disqualification (failing to get his car checked after the race) and Heatrick was dropped two places for forceful driving handing the win to Waller-Barratt with Dave Casey second.

Casey had done enough for pole for the Championship race, with Weaver alongside, Waller-Barratt and Kew on row two, with McDonald and Bland on row 3.   Casey led them away from Waller-Barratt, Weaver and McDonald but soon the yellows were out for Christie who had made heavy contact with the wall, Graeme Callender joining him.  Casey led them away again and was holding his own until they hit the backmarkers.  Waller-Barratt, Weaver and McDonald all closed up on the leader as they came upon Paul Yule.  Casey chose the outside line, allowing Waller-Barratt to nip through on the inside followed by Weaver and McDonald.  Casey dropped down the order and eventually spun into retirement.  These three were more or less nose to tail up to the chequers,  Waller-Barratt kept his cool  though, taking victory for the second year running.  Needless to say Carl was delighted and said it felt even better than his win the previous year.   He was still grinning like a Cheshire cat the following morning!  Martin Kingston