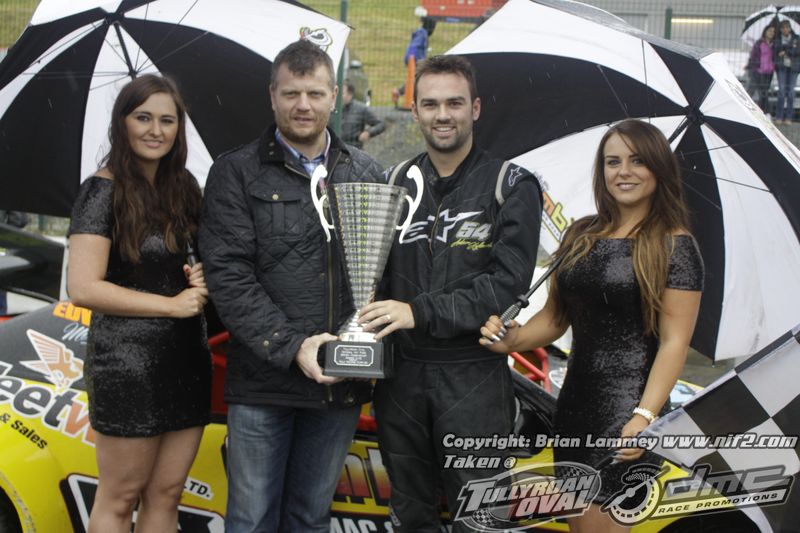 24 cars arrived to contest the championship, all the regions being represented, but for two of them by a single car only. Defending Champion Dave Casey being the sole representative from Southern Ireland and Rob McDonald being the only one from Scotland. England was represented by Dick Hillard, Billy Wood and making their track debuts were Stuart McLaird and Carl Waller-Barrett. This left the locals and all the regulars were out – Adam Maxwell, Glenn Bell, Derek Martin, Keith Martin, Shane Murray, John Christie, Simon Kennedy, Jaimie McCurdy et al. All of these drivers holding home ground advantage and any one of them had potential to take the win. John Christie clearly starting a trend when he rolled his venerable Fiesta out, Ian McReynolds entering his slightly newer Citroen Saxo. Christie set the fastest time in practice.

Due to lower than expected numbers entering, one of the planned qualifying races was cancelled, so the grid for the Championship final would be decided over two races and not three.

Qualifying – The pre-race draw saw McCurdy on pole for the first heat which he converted into a win with his usual unfazed style, keeping the head down and letting others do the work. This was made a little easier with no less than 3 cars pulling up before the start; Brendan McConnell, McReynolds and Wood, but all 3 would return later. The race was not long progressed when Maxwell was eliminated after being put into the wall by Philip McCloy, McCloy not being as observant as he perhaps should have been and not giving Maxwell enough space to race fairly and was excluded for his efforts. Upfront in pursuit of McCurdy it was Hillard, Rab Forsythe, McLaird, D Martin and McDonald in a close train although McLaird was soon squeezed to the outside. Stuart’s car performing well thanks to Glenn Bell who had taken it out for a run in practice and recommended some subtle but valuable suspension changes. McLaird’s drop allowed Murray and Christie to lock onto the train as Waller-Barret retired to the centre with a badly bent propshaft and broken gearbox. D Martin was making progress taking Hillard on the outside for second place at Turn 1, but in doing so the two cars briefly locked together, causing McDonald to hit the back of them and briefly got out of shape, this left Murray who was just behind the Scotsman with nowhere to go and spinning McDonald as a result. Patience clearly being in short supply here, but in the frantic pace that Tullyroan brings you can’t hang about either. As McCurdy was weaving his way through the back markers this allowed D Martin to close in, but there was not enough time to mount a challenge for the lead, McCurdy keeping it smooth to win ahead of D Martin, Murray, Christie and Casey.

For the second heat Bell had the front row to himself as McReynolds couldn’t repair his axle issues in time. With Hylands behind him on the second row Bell wouldn’t have an easy run to keep the lead and Hylands was with him from the green flag dropping and would stay like this for almost the entire race. Casey was hoping to improve on his fifth place in the first heat and was immediately into battle with Maxwell but a wide line into Turn 3 allowed Maxwell to get through on the inside, but Casey tried slamming the door on the World Champion which failed as he tangled with Maxwell and forcing both Waller-Barrett and Christie to take avoiding action which sadly eliminated them both bringing out the Red flags – Waller-Barrett coming off worse. Casey later being excluded from the results and making it no finishes for either Maxwell or Waller-Barrett. The restart saw Bell and Hylands once again in close proximity but the restart was short lived with another coming together at Turn 3, this time between Ben McKee, Murray and D Martin, Murray’s car coming off the worse, hard into the wall with heavy frontal damage and McKee’s night was also finished after skimming along the wall. A post-race video review revealed the incident was a case of 3 into 1 just won’t go and nobody was willing to give up position. Scenarios like this are usually discussed in the drivers briefings but ultimately it’s down to the drivers to race fairly and to give an inch if possible if it will make things easier for everyone. The second restart saw a quiet race with Bell leading Hylands to the finish with Gary Wilson, K Martin, D Martin and McDonald following.

After his damage received over two races Carl Waller-Barrett was all set to go home on Sunday morning, but a lack of ferry spaces and a generous offer from Derek Martin and his team saw lots of midnight oil burnt and Carl’s car was repaired locally overnight, the suspension damage from the second race damage being fixed, allowing the European champion to start the British Championship. This was greatly appreciated along with the help that Jaimie McCurdy and his team gave Carl to repair the gearbox and exhaust damage after the first race. On-track rivals and friends in the pits is always refreshing to see.

Conditions were poor with light drizzle throughout the race. Bell was the first to make the jump at the flag, charging past D Martin into the lead at turn one. Alas his efforts were in vain as behind him not every had stayed in grid formation before the green flag calling for a restart. This proved as spectacular, pole man D Martin completing a self-inflicted 360 spin crossing the line, bringing a lot of held breaths, but miraculously avoiding contact and re-joining not too far down the field in pursuit of the leaders. This brief melee allowed Bell and Hylands to take full advantage and push ahead already opening a decent gap at this early stage, Bell holding on around the outside without giving Hylands room to get away.  This went on for several laps with both cars side by side, lap after lap. The pack behind comprised of K Martin, Wilson, McCurdy, McDonald and a recovering D Martin. Maxwell and Waller-Barrett were also making progress. Just after Hylands and Bell had lapped David Kernohan, a coming together between Wood and Carl Sloan at turn one left both cars prone and waved yellows paused the action briefly. This ruined the rhythm of the race as it would have been interesting to see how the leading pair would have handled lapping traffic and if the lead would have changed or not.

The single file restart saw Hylands get away better from Bell pulling a better gap than he had before and able to use the outside line to his advantage. Behind Bell it was K Martin still but nephew D Martin was pushing hard and had better traction coming out of the bends. This allowed McDonald to move in for fourth place past D Martin with a clean inside pass. The momentum stayed though with McDonald taking third position with another clean overtake into Turn 3, but K Martin was not giving the position up easily and he soon reclaimed it, McDonald losing two positions. Behind the three-way scrap for third, Christie and Wilson were gaining on McDonald who was now in fifth place, Christie gaining position along with Wilson as it was clear by then McDonald was in trouble. Maxwell took seventh position from McDonald just before he retired to the centre.  At the front Hylands had pulled ahead by almost half a lap ahead of Bell with D Martin in third then K Martin, Christie and Wilson. Hylands held on to win with an impressive victory ahead of Bell and Derek Martin. Hylands, Bell and D Martin all agreeing the outside line was better in the conditions but the race would have been better without the stoppage.  Such is motorsport; unpredictability is half the excitement.

Onto the reverse grid revenge race and a slidey track surface but the rain had now stopped. Here was a chance for both Maxwell and Waller-Barrett to put the previous day’s miseries behind them, occupying the front row as rookie Kernohan elected to start at the rear. Waller-Barrett made a fine start to lead the race, slotting in behind him was McReynolds who had started from third. Both drivers holding the line that Bell and Hylands fought over in the previous race. It was not too long before Maxwell had disposed of McReynolds and was challenging Waller-Barrett for the lead. Behind them Hylands was slicing through and would be fourth before too long, but with a slowly decreasing gap ahead towards the leading trio.

The greasy track led to grip limits being severely tested and Maxwell made his move on 162 which was not the cleanest overtake Adam has ever managed which sent Waller-Barrett wide and also allowed McReynolds through, Maxwell being rewarded with a black cross and upon review of video footage a two place penalty. Hylands was moving in rapidly on Waller-Barrett as the lollipops counted down the last few laps, Hillard also struggling to make a clean pass on Christie which saw Hillard excluded from the result. After the results were amended it was McReynolds who won, followed by Waller-Barrett and Maxwell, if the race had lasted for one more lap Hylands may well have got better than fourth position.

The final race for the Nationals was the Leslie Dallas Memorial Trophy to remember the former European Champion. Before the race, Clive Richardson brought out his replica #915 Dallas Racing Mk2 Escort for a few laps as Nigel King’s unmistakeable commentary from ITV’s ‘World of Sport’ blared out over the PA system, using the soundtrack from a race Dallas had won at Ballymena Raceway. The Mk2 Escort was also used a pace car for the race. Grid positions were awarded from the day’s two previous races which left Hylands on pole with Bell alongside ahead of McReynolds and Maxwell. The rain had now gone for the day and with a dry line appearing most drivers returned to slick tyres, a last moment decision which was to have later consequences.

Hylands made another of his trademark blazing starts getting well ahead of Bell with Maxwell taking a very wide outside line brushing the wall, McReynolds getting ahead of Bell in the brief confusion that followed. Everyone was struggling for grip and it soon became apparent an oily track was to blame, this being confirmed with Sloan and Forsythe sliding into the Turn 1 wall along with Hylands having a very wild moment at Turn 4. The yellow flags were soon called for and almost the entire track had cement dust thrown down to soak up the offending oil. At this point Bell retired to the centre, the opportunity for a hat trick of Dallas Trophy wins now lost. The restart saw Hylands ahead of D Martin, K Martin, McReynolds, McCurdy and Wilson. D Martin pushing Hylands hard but without a breakthrough. Conor McElmeel and McReynolds struggling still with grip levels and it was not long before McReynolds was retired again to the centre. The laps counted down with Hylands safely ahead of D Martin and K Martin and he took the flag. Unfortunately Hylands had fitted an unlogged tyre in the sudden change to slicks before the race and sadly had the win taken from him, elevating Derek Martin to the win ahead of Keith Martin and Gary Wilson.  Ed Fahey

Brian Lammey‘s photos in the Gallery

Penalties Issued:
Heat One: 343 DQ for contact on 76 which put 76 in turn one wall.
Heat Two: 261 DQ for turning across 76 triggering an accident which eliminated 76, 962 & 162.
British Revenge: 76 docked two places for contact on 162. 31 DQ for spinning 962.
Leslie Dallas Memorial Trophy: 54 winner on road but excluded for tyre logging infringement – referred to NHRPA