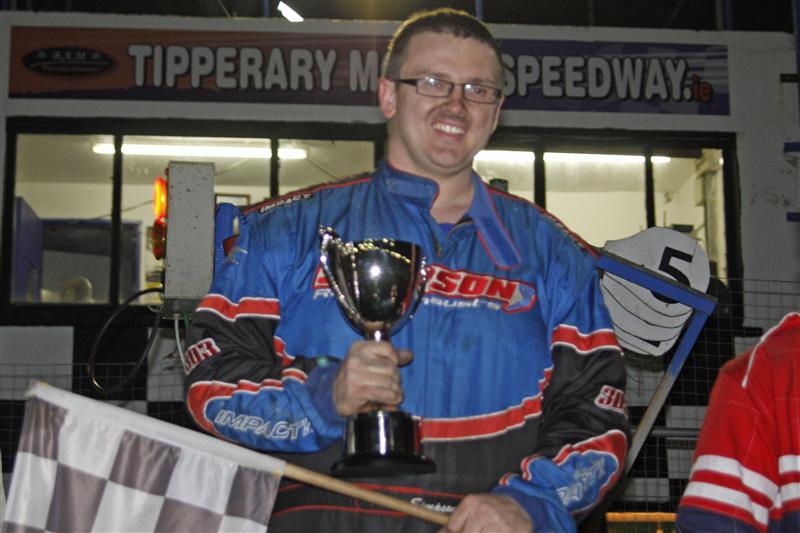 The 2011 National Hot Rod European Championship
Controversial European Win For Simpson
Tipperary Motior Speedway, Saturday October 29th 2011
Darren Black reports:  Matt Simpson regained the European Championship title at Tipperary Motor Speedway on Saturday night after a controversial race which saw the first two drivers across the line, David Casey and John Christie, both docked places for contact during the final. It most certainly was ‘one of those nights’, which saw heat wins fall to Christie, Kym Weaver and Willie Hardie, as well as the first ever live streaming of a short oval race meeting on the internet.

Twenty-seven cars gathered for the event in a wet and muddy Rosegreen pits, but fortunately after almost record levels of rainfall during the preceding week, things stayed dry for the duration of the meeting. Something of a surprise was that World Series NI fielded the strongest entry at eleven cars, and of them it was good to see a return to the tracks after a few meetings away for both Mark Heatrick and Paul Crawford, whilst Mark’s nephew Adam, who usually concentrates on the 2.0 Hot Rods in Ulster, wheeled out the team’s 206cc for his first NHR outing since the National Weekend. Car-wise, Gary Woolsey was back in his ‘championship car’ – the Boardley-built Ludlow Tigra – whilst Glenn Bell was in his Tigra and Thomas Dilly had chosen the RCE engineered Ludlow for his challenge.

Eight cars crossed the Irish Sea in search of the red and yellow chequers, led by World Champ. Malcolm Blackman and 2009 winner Matt Simpson. Gavin Murray was all repaired after his Ipswich shenanigans, and had everyone’s favourite blogger Mikey Godfrey in tow for his first Irish experience. Others making the trip from England were current form man Jason Kew, double winner last time out Steve Burrows, and Kym Weaver – who, contrary to belief was not on a track debut having driven in the one-off 2.0 Hot Rod meeting at Tipp a few seasons back. Willie Hardie was the lone Scot, but it was still a formidable looking cross-channel challenge indeed.

Of the locals, it was a first glimpse for me of Eamon Donovan in the ex-Marriott Tigra, and also a welcome return to international competition for Mike Riordan in the #142 machine.

Three 25-lap qualifiers was the race format, with each comprising two thirds of the entry. Bell and Christie shared row one for the opening encounter, with Simpson inside row two. As the grid draw had been made, John quipped to me that the only way he was going to do well was to beat Glenn away, and that was exactly what he did!! He out-dragged Bell over the strip to slip into the lead at turn one, and quickly set about building an advantage.

Simpson was now all over Bell looking for second, but just couldn’t find the gap he needed, whilst back in the pack Murray and Woolsey both found a way past former winner Keith Martin to head forwards.

In the midst of everything Godfrey lost a door which saw him get an early bath, and many eyes were fixed on Stewart Doak who relegated Riordan and was on a charge from his back group start. With Christie still ahead and destined for the win, Bell held on to take second ahead of Simpson despite a few hairy moments whilst putting a lap on the squabbling Adam H and Crawford. Burrows caved in to the pressure from Murray and Woolsey late on to allow them to take fourth and fifth, while Doak’s motor went sick late on and he dropped back from what had looked a promising start to his meeting.

Crawford had pole for heat two, but a super start from Weaver saw him slip under the other front row man, Des Cooney, to take it up. With Cooney in second, Mark H was next up in his Merc and looking very sharp indeed, as was McReynolds behind. Also looking sharp, very sharp in fact, was pre-event favourite Shane Murphy, and he was already on the move before they were brought short by a caution period when Eddie Wall and Donovan clashed on turn four.

Weaver led the restart away, ahead of Cooney, Heatrick, McReynolds and Murphy, with Murphy soon putting an outside pass on McReynolds to move fourth. He quickly did the same to Heatrick (who somehow managed to spin on the exit of turn 2 soon after), Cooney and Weaver in a masterclass that the rest could only watch in amazement. This really was top quality stuff from Shane, but alas he had an oil light come on soon after and he coasted to a halt, his meeting over there and then.

This gifted the lead back to Weaver who ticked off the remaining laps to take the victory ahead of Cooney. In the midst of it all, young David Casey hadn’t been hanging around either and he put his Tigra across the line in third after a stirring drive, ahead of McReynolds, Tom Casey and Christie.

Heat three started quite literally with a bang, as Blackman, Hardie and Adam Maxwell quickly found out that three abreast wouldn’t work as they jostled for the early lead. Blackman spun across the other two, making hard contact with them as he went. The reds were quickly called and outside assistance allowed prior to the restart. Blackman’s time ran out and he was shuffled onto the front row again with his bent steering arm straightened as much as possible, but the steering not lined at all. However, Maxwell was still under repair at the other pit gate and Malcolm had to look on none too pleased!

Blackman knew his car was ailing and he would have to try for the lead at the off and go defensive, but his efforts at the restart to nip across Hardie were in vain as he got elbowed out and quickly retired. Hardie nailed down the early lead, as Maxwell and Kew circulated side by side as they contested second spot. Jason eventually grabbed the position, before they were all called to a halt by a multi-car accident on the exit of turn four. Tom Casey had rotated, and delayed those following including Doak and Woolsey. Simpson dealt Tom a glancing blow and spun on down the road but quickly got going again, before Martin and Weaver made much heavier contact with the stricken #961 machine. With the race suspended, Casey, Martin and Weaver had to go as they were all stationary when the flags were called for – it’s a rule not many like but as it’s there in black and white it has to be invoked. There were appeals afterwards that in England they don’t use it anymore, but with no official line from the NHRPA it had to be implemented. Perhaps it is time the rule was revisited, as it can actually encourage a driver to drive through an accident to keep moving, but that’s for another time…

Hardie led them away again, with Kew in close attendance and certainly letting the Scot know he was there. Doak soon went alongside Maxwell to challenge for third, with Murray outside D Casey right behind them. As Cooney went for a spin as he challenged Bell further back, Doak made his move on Maxwell stick shortly before Murray departed in a shower of sparks – his broken suspension suggesting he had most definitely hit something! Maxwell joined him on the sidelines soon after, as Hardie took the flag to record the final heat win of the night. Kew took second, whilst D Casey’s advances on Doak came to nought as he went sick nearing the end, and very nearly fell into the arms of Woolsey at the line, but the NW Developments man himself was to lose two places in the final analysis for jumping the start.

The 50-lap European Championship final saw Christie and Bell share the front row once the calculations had been completed, with Casey and Hardie on row two. Only 19 came under starter’s orders, with notable absentees being Blackman, Martin, Cooney, Riordan, Tom Casey and of course Murphy.

As is always the custom at Tipp (and drivers are briefed to this effect), the green flag came out at the mid-point of turns three and four, and Christie found himself running wide and taking Bell with him which allowed David Casey to nip up the inside as they crossed the strip three abreast. It was a dramatic start to say the least, whilst further back Godfrey found himself in the wall with Weaver somehow involved too.

So Casey had the early lead, whilst Hardie also relieved defending champion Christie of a position to run second, ahead of Bell and Simpson. Matt soon got under Bell, which turned out to be for third once Hardie disappeared onto the infield in trouble. Casey had already pulled a decent gap by now, and it looked as though the shock win was certainly on the cards.

Soon Christie was stretching away from Simpson, and more importantly closing on the leader. His progress seemed to slow at a time, but he was soon on the tail of the lead car. He quickly looked to the outside but saw his initial bids thwarted. He tried and tried again and again, but was finding Casey to be a very tough nut to crack. Soon Simpson and Bell were closing fast, and that it seemed was the spur Christie needed to get right alongside the lead car. Down the back straight he got right alongside, further than he had previously, and across the start line he was almost there. It looked as though it would all be done and dusted out onto the back straight for sure, but in David’s bid to keep him at bay he ran wide into turn one and tagged the rear off-side of John’s Tigra, sending it into a lurid slide through the bend. Casey was well clear again in an instant, but collected a black cross next time around, whilst Christie slotted back in behind Simpson in third.

The lap boards were soon out, with Casey still a short way clear but with Simpson having Christie all over him like a rash. Matt was becoming very defensive indeed, but into turn one on the final lap there was contact between the cars which allowed John to slip past and cross the line second behind on the road winner Casey. Next up were Simpson, Bell, Woolsey, Doak, Murray and Kew.

There obviously had to be a major steward’s inquiry into that lot, and it duly took place on the centre green where all the drivers concerned were asked for their opinions on the various incidents. The outcome was that Casey was docked two places for his contact on Christie which had stopped John from completing his outside line pass, whilst Christie was also docked two places for his last lap contact on Simpson which allowed him to slip underneath the 2009 champion. That elevated Matt to the top step of the podium, and he quite rightly was declared the 2011 European Champion. Bell therefore inherited second, with Casey and Christie relegated to third and fourth, ahead of Woolsey, Doak, Murray and Kew.