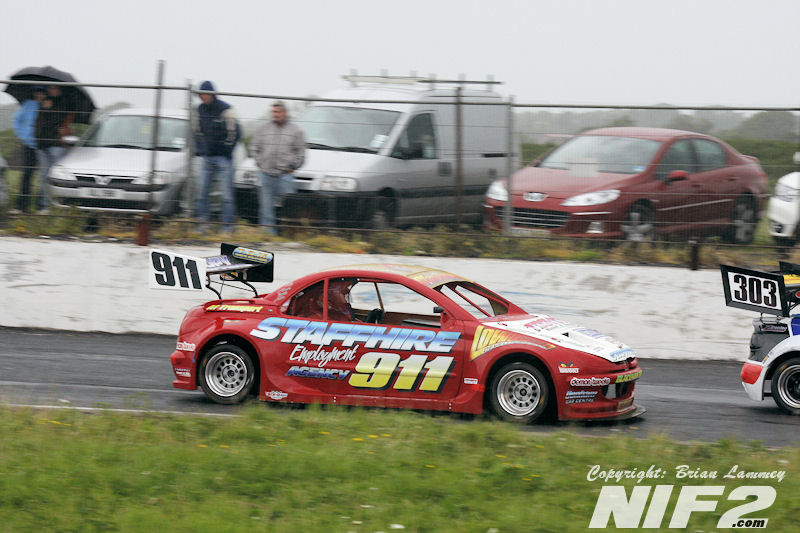 The 2011 National Hot Rod British Open Championship
Best of British for Blackman
Nuttscorner Oval, Sunday September 4th 2011
Darren Black reports:  World Champion Malcolm Blackman stamped his authority on Nuttscorner Oval on Sunday afternoon when he took victory in an absolutely thrilling 2011 British Championship encounter. After an opening heat win for defending champion Stewart Doak in the relative dry, it was former Superstox World Champion Jason Cooper who took the win in a wet heat two. By final time conditions were treacherous, and after a superb dice between Blackman and pole sitter John Christie had been brought up short by a big accident, Malcolm was able to storm home to the win.

The majority of the previous evening’s combatants were on hand once again, although Andrew Murray, Wilson Hamilton and Will Scott had departed the scene, along with the unlucky Keith Chesher after his oil dramas in the Irish Open final. The rest were joined however by Englishman Jason Kew, Ian McReynolds (who’d been at a wedding the previous day), and Shane Murray, having another outing in a spare Willie Hardie car, but not the same one as he’d previously pedalled at home as Hardie himself had been in it all weekend!

There was a hint of drizzle in the air as they set off in the first qualifier with all on slicks; defending British Champion Stewart Doak quickly turning pole spot into the lead ahead of Kew, Hardie and Gavin Murray. Behind the leading quartet, Bell, Adam Maxwell and Christie were next up, whilst Blackman was making significant progress from the rear of the grid having got himself ahead of Matt Simpson in the traffic.

Tom Casey found himself out of it after contact from McReynolds which earned the latter a black cross, before Hardie found a way past Kew and towed Bell and Gavin Murray through too in his wake. Christie soon did likewise, as further down the pack Adam Maxwell got a black cross for persistent contact on other cars.

Doak was well ahead at the end for an easy win, and with Bell losing out nearing the end it was Gavin Murray who inherited second ahead of Christie and Hardie.

Jason Cooper had the front row to himself for heat two, by which time it was wets all round as the rain was coming down much harder, and he quickly took charge of proceedings ahead of fellow Englishmen Simpson, Blackman and Chris Haird. At the other end of the pack Gavin Murray spun in the middle of turns one and two, perhaps after coming hard across Hardie, and the resultant spin momentarily pinned heat one winner Doak against the wall. He quickly wriggled free, only to rejoin behind leader Cooper. In the midst of it all too, Adam Maxwell collected another cross, this time for a jump start.

As Simpson and Blackman dropped Haird and started fighting hard for second, leader Cooper had his mirrors full of the lap down wet weather specialist Doak. Stewart probably spurred Jason on more then he really needed too, or perhaps wanted to, but he was nevertheless getting the break from the squabbling duo behind that he needed.

Doak finally did unlap himself and move on up the road to complete a fine recovery, but that was to take nothing away from a fine drive from Cooper who took the flag and the win in comfort. Most eyes had been on Simpson and Blackman throughout, as they conducted a fine battle with rarely less than a hair’s breadth between them. Simpson got the better of it to land second, with Blackman third ahead of Martin and Haird.

Consistency had given Christie pole spot for the final, with Cooper alongside, whilst Blackman and Doak looked very menacing to say the least on row two. There were a few non-starters in Davy McKay, Shane Murphy and Mark Heatrick and conditions were now more suited to powerboats than Hot Rods. Shane in fact had broken a back axle completely in two during the second heat.

As Christie established the early lead ahead of Blackman, Doak moved ahead of Cooper for third only for the merest of touches to send the Cirrus Plastics car spinning through 360 degrees entering the back straight. Stewarty lost little time getting back into it, although a whole hatful of places had gone and he was back to ninth spot.

The lead duo were by now pulling clear, with Christie receiving a few blue flags but Blackman unable to get around him. On at least two occasions Malcolm came in way too deep and lost valuable time, but was soon able to claw it back and return to the bumper of the #962 car. Backmarkers were always going to play a huge part in the proceedings, and so it turned out…

A gaggle of cars were attempting to put Les Compelli a lap down, including Tommy Maxwell, Steve Burrows and Thomas Dilly. But they had the lead duo bearing down on them to lap them, and indeed put two laps on Compelli. But nobody could get by Les, despite numerous waved blues and warnings over the Raceceiver. Tommy Maxwell looked like he may make it at one stage, only to be checked back into each corner, and by now the lead pair had joined the back of the pack with absolutely nowhere to go as it was two abreast in front of them! And to make it even more interesting, third placed man Gavin Murray, along with Simpson, were now right there too. Christie chose inside, whilst Blackman dived to the outside and even fractionally went ahead crossing the line at one stage.

Absolutely nothing was giving at all, but it had to at some stage, which was when Dilly went fence-wards from the inside line crossing the start and finish line. In an instant Christie was heading the same way, smacking the fence and the leader was gone. He bounced back across the track and was collected by the hapless Martin, who is certainly having his fair share of bad luck in recent weeks. The yellows were quickly out to clear up the mess, and Compelli was ordered to the infield for the restart.

So, out of it all Blackman had been delayed in the incident, and we now had Gavin Murray in the lead! Simpson was next up, or indeed would have been, only for his car to die on him on the rolling lap. As Blackman helped him to the centre, the huge thump on the steering wheel only began to tell how disappointed Matt was…

So it was Murray from Blackman, with Doak sensationally now right back in contention even after his earlier spin, whilst Kew was in fourth after another very good drive indeed. As the green came out again Murray quickly found that a car that had been right on the money before the stoppage, had completely gone to pot after it! Blackman easily slid through on his inside to take it up, with Doak doing likewise to go second.

Murray eventually retired, and any hope of a battle for the lead disappeared too when it became apparent that Doak was struggling with a misfire on his machine – most probably from the rain but possibly from the fact that he had dealt the Christie car more than a glancing blow during the earlier incident.

That wasn’t to bother Blackman though, and he romped home to take the double chequers and with it his first ever British title. Outgoing champion Doak hung on for second, with Kew delighted in third ahead of Hardie, with Tommy Maxwell, Haird, Burrows and Shane Murray the only other finishers.