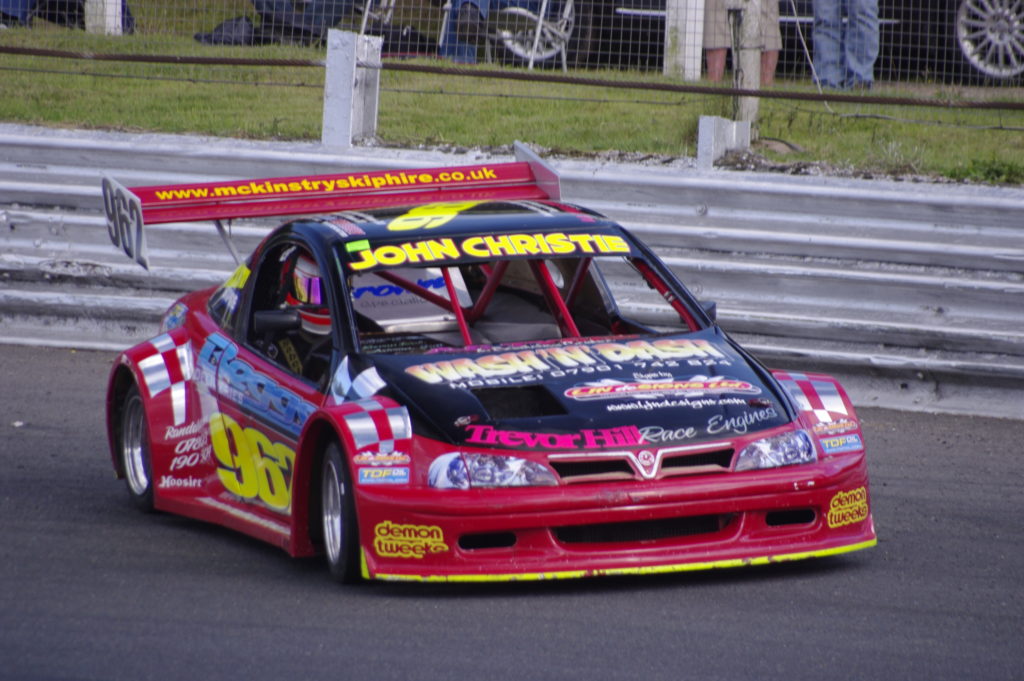 John Christie 2010 European Champion
Tipperary Motor Speedway, Saturday 9th October
Darren Black reports:  John Christie finally got his hands on a major National Hot Rod title when he took a superb win in the 2010 European Championship at Tipperary Motor Speedway on Saturday October 9th. During an enthralling final, John managed to edge his Tigra around the outside of long time leader Keith Martin for a spectacular victory in what was hailed as one of the great National Hot Rod championship races.

As has now been the case for both majors on this side of the Irish Sea this season, the entry was far from massive, but for the 24 cars that did turn up it was certainly a case of quality over quantity, with most of the sport’s major players on hand. From England came the World Champion Chris Haird, alongside defending European Champion Matt Simpson and former winner Malcolm Blackman. Stu Carter, Gavin Murray and Steve Burrows made up the rest of the UK contingent, with Burrows taking to the track in a new Peugeot 206cc that only the eagle-eyed would have noticed – that’s just how similar it looked to his Tigra!

From Ulster came recently crowned British and Irish Open Champion Stewart Doak, along with Christie, Martin, Glenn Bell, Mark Heatrick, Rab Forsythe, Ian McReynolds, Paul Crawford and Davy McKay in a very formidable line-up indeed, whilst the home stars of National Champion Shane Murphy, Caseys x2, Des Cooney, David O’Regan etc were joined by the now World Series England-domiciled James O’Shea for his first home outing in quite some time. That was until James’ engine cried enough in practice and he was forced to turn spectator for the evening, as was Heatrick who’s Merc had similar engine bother.

With the 2/3rds format in operation, there was going to be plenty of room for some excellent hot rodding, and Doak set off at the head of heat one by establishing the early lead, with Martin slipping ahead of Cooney to go second. As David Casey had a wild ride through turns three and four, Simpson went under Cooney for third just as local favourite Murphy signalled his intentions by nipping past Blackman further back.

Martin was all over Doak like the proverbial rash at the front, and with the Simpson/Cooney/Bell/Murphy/Haird train now closing, Martin took to the outside of the leader. Keith soon realised that it was going to be a tall order to pull it off, and slammed himself back into second just in the nick of time, obviously playing the percentage game and thinking that he could quite easily get rail-roaded way, way back.

As we entered the final stages the reds were soon flying as Murphy popped a core plug at the end of the home straight, the resultant fluid sending the Tervas machine sliding backwards into turn one as the others took avoiding action. That was all bar Haird, who found himself stranded alongside Shane midway round the bend. On countback, form man Doak took the win from Martin, Simpson, Cooney and Bell, with the new ORCi ruling regarding causes of stoppages seeing both Haird and Murphy start the evening with DNF’s.

Sterling work by Murphy’s pit crew saw Shane just make the start of heat two, the #970 machine rolling out even after the rest had completed their warm up laps. Young David O’Regan was the first to show in this one, with Haird slotting into second from Murray and Eddie Wall. Murphy and Christie soon went the long way round Wall, dropping Blackman in the process as he hesitated in making his move stick too.

Tom Casey, Bell, Simpson and Cooney were having their own battle royale further back, with Tom attracting a black cross when he punted Wall into a spin. O’Regan was well clear and driving a very mature race to which the World Champion had no answer, until he came to lap Crawford, McKay and Wall. All three held a tight inside line, thus showing the leader the outside berth. But it had been coated in oil (most probably from Forsythe’s diff), and David unfortunately found it and went headlong into the turn three wall to end what had been a very promising run.

Haird reeled off the remaining laps to take the win, with Murphy getting the better of Christie and Murray in the closing stages amongst the traffic to take the runner up slot. Murray was third from Christie, Blackman and Bell.

Crawford had pole for heat three, and quickly assumed the lead from Carter and Tom and David Casey. From the rear, the Ulster trio of Christie, Martin and Doak were making great strides forward, until Doak lost out after a hairy three abreast moment with McKay and welcome returnee Neville Stanley. Crawford was still defending for all he was worth out front, until David C made the bold move right around the outside to take it up. Doak’s rear spoiler then came adrift and was trailing precariously behind the Cirrus machine, but before he could be removed from the race it detached itself and he was allowed to continue…I’m sure he wished he’d got to see that dreaded red-crossed flag, as we shall soon hear…

Both Carter and Tom C had struggled to get by Crawford, but Martin and Christie soon arrived and pulled it off with ease to go second and third. Then Tom got into a spin entering the home straight, which was to trigger the mother and father of all accidents. On his way round he collided with Les Compelli, who speared into McReynolds’ Saxo, which just happened to have Doak blasting down the outside at full chat at that very moment. The British Champion’s now wingless Tigra was squeezed up on to the wall, where he took out at least two posts before coming to rest down the straight on his roof after a terrifying ride indeed. The car was badly damaged, with Stewart luckily extracting himself none the worse for wear to a sympathetic round of applause from the fans. It’s not very often you see a National upside down, but Stewart has now done it twice in three odd years – his SHP Corsa coming to a violent end down the back straight at Ballymena back in 2007. Don’t even dare mention that things like that happen in threes…

The race was declared at that stage, with David C taking a fine win in his Corrado from Martin, Christie and Crawford, the latter having driven probably his best race on the international stage to date.

With the calculations completed Martin was on pole with Christie alongside, whilst David C and Murray shared row two ahead of Simpson and Bell on row three. World Champ Haird was on grid 12, with National Champ Murphy directly behind courtesy of their non-finishes.

Martin quickly settled into the lead as expected from Christie and David C, and these three soon drew away from the battle for fourth between Murray, Simpson, Cooney and Bell. But such was the pace out front that Casey soon got dropped too, and it looked to be a two horse race for the red and yellow chequers. Crawford was an early casualty as an inadvertent thump from Murphy left his bodywork fouling a rear tyre, but Shane had most certainly the bit between his teeth as he pulled himself onto the back of the fourth place train very early indeed.

Christie was tracking Martin’s every move, and soon hauled himself alongside the former World and European Champion, but just couldn’t make the move stick. Martin was using all his experience as John constantly drew level, just holding him off into each turn like the seasoned campaigner that he is. It was becoming absorbing stuff, and I doubt anyone in the stadium was watching anything else – all they needed to see were the lead duo at it hammer and tongs.

Christie would occasionally take a breather before coming back strong again, and indeed on one occasion he got superb drive out of turn two and pulled ahead of Martin down the back straight. John tried to take the line into turn three, but Keith was having none of it and the duo arrived into the turn both on opposite lock….but the order still remained the same.

John then took another breather and attentions switched to Murphy’s charge. He had relegated Bell and Cooney, and soon did likewise to Simpson with a similar outside pass to go fifth. Up front Christie was on the move again as the laps dwindled away, and after yet more side-by-side laps, John got a good run into turn one on the outside, which gave him the momentum down the back stretch. He was never going to make the same mistake again, and this time didn’t cut in, instead running the high line and completing the pass as they passed the start/finish line to great applause from the terraces.

A quick glance back and Murphy was now a fantastic third, having sent Murray and David C the same way as the others. Such was the ferocity of the lead battle, had Christie not grabbed the lead when he did, Shane could’ve been right with them. He did get onto Martin’s tail over the last lap as Keith’s brakes had all but gone by that stage, but it was to be Christie’s finest hour this time around. John took the flag to tremendous celebrations as the infamous ‘962 crew’ went wild with joy.

It was most certainly one of the finest races I have ever witnessed, and John was over the moon at the outcome. Remember that only three weeks previously the car was as good as trashed after his jammed throttle at the Irish Open, so I’m sure John would heap plenty of praise on his pit crew for getting it back into top shape. Behind the jubilant champion came Martin, who admitted that he’d “given it absolutely everything” and Murphy, who was no doubt rueing his non finish in heat one.