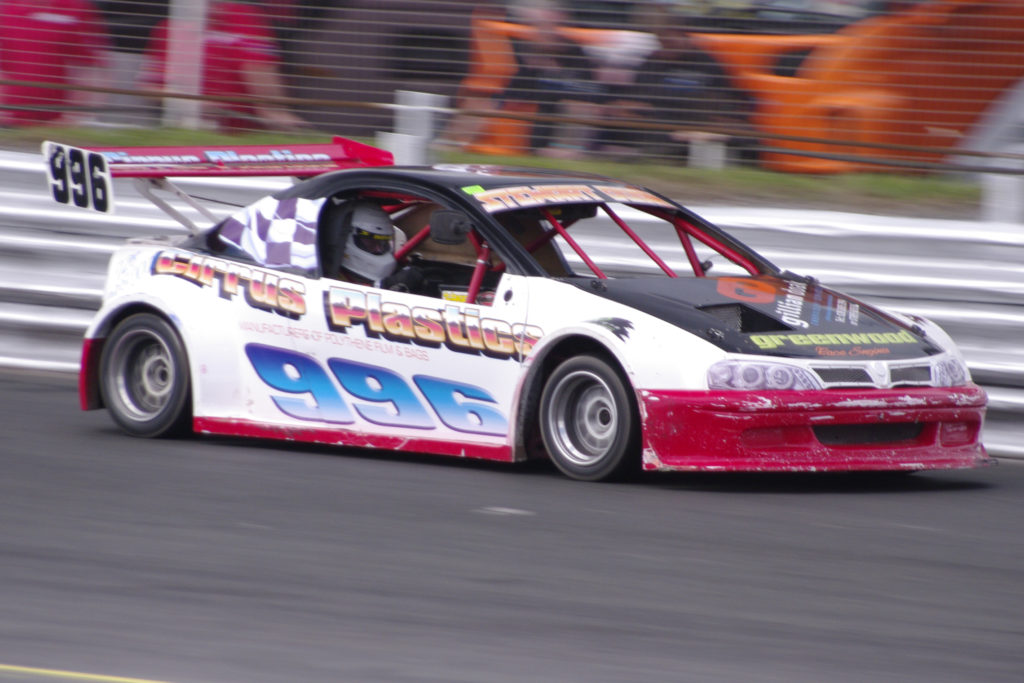 The 2010 NHRPA National Hot Rod British Open Championship
Stewart Doak 2010 British Champion
Ballymena Raceway, Saturday 18th September
Colin A. reports:  Stewart Doak was the worthy winner of the National Hot Rod British Championship at Ballymena Raceway on September 18. Doak split the qualifying heat wins with Northern Ireland Champion John Christie and then successfully fought a race long battle in the final with Christie and Glenn Bell to earn the right to carry the black and white chequered roof for the next twelve months.

Rain, rain and more rain was the order of the day around Ballymena on race day and it was a sodden track that greeted the nineteen entrants for the British Championship, which was kindly sponsored by SHP Motorsport in association with Hoosier Tires and Image Wheels. Although the rain relented at certain points during the meeting a light drizzle hung in the air and the track never dried up throughout the evening. Six visiting drivers joined thirteen from the province, with Dick Hillard, Steve Burrows and Willie Hardie making the trip over from the mainland and Shane Murphy, Des Cooney and Les Compelli travelling up from south of the Irish border. In the local ranks there was a surprise return for Will Scott after a long absence, Will having a play in his old Ford Fiesta.

Two reverse grid qualifying heats were the order of the day to determine the starting positions for the British Championship and all nineteen cars present took to the track for heat one. Unfortunately Corrie Beggs would only complete the warm up laps before retiring his Peugeot 206cc for the evening. Front row starters Burrows and Mark Heatrick were first to show in this one, but the whole pack was soon pulled up when Rob Forsythe rotated his Vauxhall Tigra on the exit of Suffolk bend, National Champion Murphy getting caught up in the melee and forced to retire. Heatrick assumed control at the resumption with Burrows going along nicely in second too, but Keith Martin was now into his stride and charged around the outside of Burrows and Heatrick to take it up. John Christie was soon following in Martin’s wheel tracks and once safely out front the pair got down to some serious racing over the lead. A wider outside line is normally the preferred route around Ballymena when the circuit is damp and despite Martin being well tuned into that particular groove Christie went even deeper into the bends and managed to haul himself up alongside Martin’s Vauxhall Tigra. The pair circulated side by side for a number of laps before Christie finally broke Martin’s determined but fair defence to pull clear for a hard fought win. Almost unnoticed behind that absorbing lead battle Stewart Doak had been on a fantastic run through the pack which carried him from the back row of the grid to third by the finish. Doak has always been one of the men to watch out for on a damp track and that performance certainly marked him out as a serious contender for the title. Glenn Bell was fourth with Cooney a solid fifth and Wayne Woolsey sixth in the NW Developments Mercedes SLK.

It was Doak and Woolsey who shared the front row for heat two where Davy McKay joined Beggs as a non-starter in this one. Doak continued his impressive pace from the first qualifier and quickly set about building up a safe cushion out front. The winner was never in any doubt in this one, Doak was home and hosed well down the road at the chequered flag, instead the interest lay on whether Christie could match or better Doak’s third place finish from heat one to have a shot at pole position for the final. First Christie had to find a way around Hardie before saddling up to the battle for second and third between Murphy and Woolsey. Neither was going to sacrifice their position easily, but Christie managed to split the pair in the closing stages to grab third behind Woolsey. Murphy was fourth with Martin and Heatrick fifth and sixth.

That left things all square between the two heat winners after qualifying so a draw was required to split them which put Christie on pole for the forty lap British Championship final, with Doak alongside. Row two consisted of Woolsey and Bell, with Martin and Hardie on row three. Chris Foster, taking part in his first ever international event in the Nationals, had driven well in the heats to earn a place on row four alongside Heatrick, with Forsythe and Murphy rounding out the top ten on row five. Compelli, Paul Crawford, Ian McReynolds, Burrows, Hillard and Scott completed the sixteen car line-up, with Cooney unfortunately unable to join the grid for this one after troubles during heat two.

As with the qualifying heats a rolling start was deployed for the final and once again this was perfectly observed by the drivers. The front row starters barrelled side by side into Fisherwick bend for the first time and that’s the way the pair circulated for a gripping opening series of laps before Doak edged his way ahead on the outside line. Christie dropped in behind the leader with Bell holding a watching brief in third. The former Stock Rod World Champion was able to run at a similar pace to Doak and Christie in this one and notably was also using a much more conventional racing line around the track than the front two who still preferred the wider line through the bends. Bell continued to make that tighter line work nicely and a few laps later nipped inside Christie to steal second. Bell was really pushing on now and had one serious look at getting through on the inside of Doak too. That scare was enough to convince Doak to change his line on the corners, the race leader noticeably tightening his line to cover Bell’s charge. The trio had pulled well clear of the rest and continued to circulate as one for the remainder of the race. One mistake by the race leader and Bell was ready to pounce, with Christie still working the wider line and well in contention too. That mistake never came however as Doak coolly controlled the pace from the front and never put a wheel out of place to claim the title after a masterful display. Bell was forced to settle for second again, just as in 2009, with Christie following closely in third and no doubt glad to at least reach the finish in one piece at Ballymena’s international event. For the past two seasons the #962 Tigra had left Ballymena in bits after big smashes at this meeting, but little did we know John’s wretched luck at the province’s international meetings would this year be transferred to Nutts Corner the following day.

Behind the top three Hardie, Martin, Heatrick and Murphy were engaged in a fine tussle for fourth and it was Murphy who took that place to continue his impressive result sequence in the majors during 2010. Martin, Heatrick and Hardie followed next with Woolsey in eighth. The former Two-Litre Hot Rod World Champion had taken a bold gamble to go with two slicks for the final in the hope that the track might dry up and bring him into play, but dropped down the field quickly in the opening stages and never recovered. Foster and McReynolds completed the top ten, with Crawford rounding out the finishers in eleventh.
Results:
Qualifying Heat One: 962 – 994 – 996 – 9 – 921 – 50 – 901 – 960 – 72 – 777
Qualifying Heat Two: 996 – 50 – 962 – 970 – 72 – 9 – 960 – 901 – 994 – 977
2010 British Championship: 996 – 9 – 962 – 970 – 994 – 960 – 72 – 50 – 901 – 977
It was certainly a very intriguing final where the outcome was in doubt all the way to the finish and also notable for the clean and fair nature of the racing on display. Considering the track conditions that is a great credit to the driving standards of all those that took part and a positive reflection on the steward’s contribution to the meeting as well. There still remains a great interest in and affinity for top line National Hot Rodding amongst the race fans in the province and this international weekend should be looked upon by everyone involved in the formula as an opportunity to nurture and encourage the sport in Northern Ireland.

Ballymena Raceway would like to thank those who generously contributed money to the prize fund for the event.