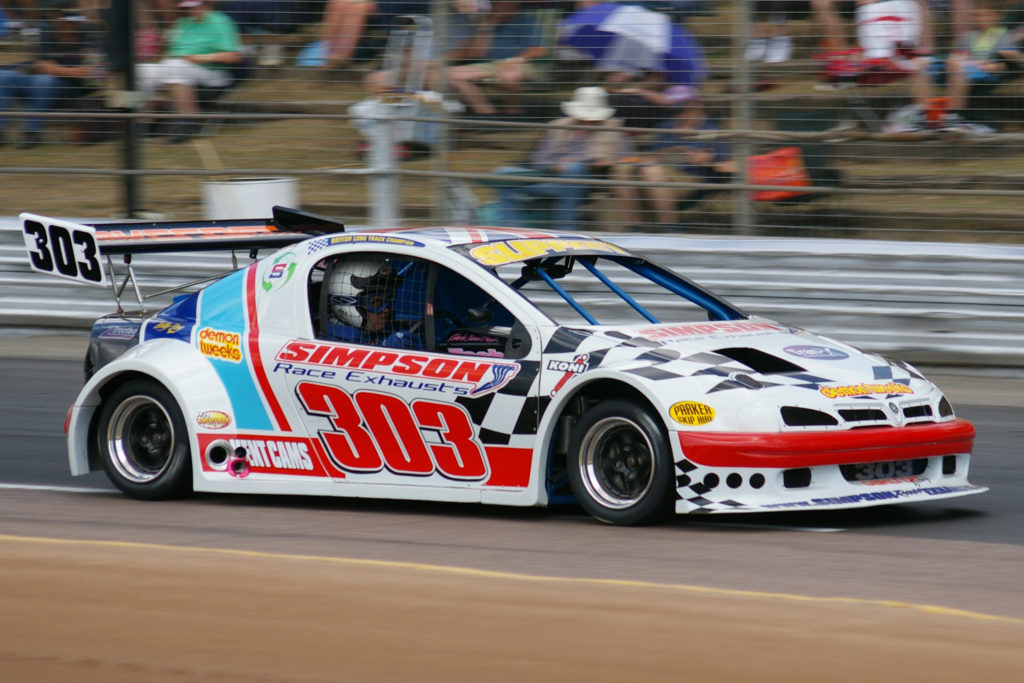 Story – Darren Black:  Matt Simpson finally broke his duck in major title races when he secured the win in the European Championship at Tipperary Motor Speedway. With the meeting condensed into a one-day affair this year, many had feared that the entry might suffer badly. These fears were allayed when a quality 30 car field assembled to do battle.

Four half-car heats were the order of the day, with each driver racing in two. Amongst those gathered in the pits were a number of top quality visitors from both mainland UK and Northern Ireland. Points of note were World Champion Carl Boardley back in his Tigra with the Mercedes now for sale, and Gary Woolsey choosing to run his Mercedes this time.  Another interesting one was Glenn Bell aboard his new Tigra, as opposed to his more usual Peugeot CC.

The first heat started quite literally with a bang, as defending champion Shane Murphy and Jeff Simpson controversially clashed on turn one, lap one.  Jeff had got the better start from grid two to unwind the stagger to Murphy, but attempted to cut across before he was completely ahead. Even with their spat at the World Final still in the memory, Shane was never going to let Jeff in and the two traversed turns one and two locked together before sliding to the fence where Jeff’s car mounted the wall and ended up on its side after collecting a post.  It may not have been the fastest of accidents, but it was more than enough to finish Jeff for the night.  Murphy initially led the restart before World Champion Carl Boardley eased through for the win, despite Shane coming back hard in the closing laps.  Neville Stanley took third some way back, from Des Cooney, Colin Gomm and Stu Carter. One of the pre-event favourites, John Christie, departed the race midway through with transmission trouble whilst lying fourth.

Ulsterman Bell led from pole in heat two, with Jason Kew’s stunning Merc in second ahead of Mark Willis – back at the scene of his finest hour in National Hot Rods.  Keith Martin and Blackman soon relegated Willis who would eventually retire, before Malcolm put a superb outside pass on Martin to go third. Further back, Matt Simpson and Woolsey were making strides to the front, as David Casey ended up facing the wrong way in turn four. With Bell clear, Blackman was pressuring Kew for second, and he outfumbled him as they got amongst the backmarking Damien Mulvey and Eddie Wall to take the spot. The drama wasn’t finished though, as Bell’s Tigra spluttered to a halt almost within sight of the flag suffering from every driver’s worst nightmare – lack of fuel! That gifted the win to Blackman from Kew, with Bell just making it home in third from Martin, Simpson, David O’Regan and Woolsey.

Andrew Murray took them away from pole in heat three, with Tom Casey hanging on, on his outside, for a few tours before settling into second from Les Compelli. Simpson was soon challenging Les, whilst further back Boardley had his hands full trying to relegate a stubborn Stanley, and only succeeded in letting Blackman by.

Murray now had a gap at the front, and Simpson was all over Tom C having dispatched Compelli.  With three to go, the race was declared with a car stranded on the exit of turn four, giving Murray the win and an excellent reward for a week of hard graft after the extensive damage suffered at Nuttscorner Oval the previous weekend.  Tom C held off Simpson for second, with Compelli, Gomm and Blackman next up after Boardley lost a shedload of places late on, battling with Stanley.

Gary Woolsey stepped off pole to lead the final heat away, with fellow Portadown man Stewart Doak dropping in behind.  Gary was showing excellent pace as he quickly pulled clear, with Doak also rather lonely in second. John Hotby held third ahead of British Champion brother Andy, who was soon challenging him but just as he moved inside he seemed to get a tap from Mark Heatrick which lost him quite some ground. Heatrick soon got by John H, but had Andy H bearing back down on him before the #960 Merc retired with a very sick sounding motor. Woolsey eased to victory by a quarter of a lap from Doak, with Andy H, David C and Cooney next up. Martin got sixth after a titanic battle with Christie, Murphy and Carter.

The calculations had given Blackman pole, with Murray quite a surprise alongside, ahead of Woolsey and Simpson on row two, and Kew excellent value in fifth spot alongside Cooney.  Defending champ Murphy was on row four, with World Champ Boardley on row five.

As the pace of the rolling lap increased into turn three, Woolsey seemed to get into the back of pole-man Blackman, and the #940 Mercedes led them under the green.  Blackman was having none of that, and came back hard into turn one, with both going for a wild ride out wide, before coming back across the pack causing the mother and father of all accidents which involved almost the whole field.  The reds quickly got an airing, with Gomm minus a near side front corner and Tom C out too.  Probably the most unfortunate was Murray, who had been squeezed wide in the initial skirmish exiting turn 4; the resultant loss of places putting him right in the middle of the pile up and he was out too with driveshaft trouble caused by the impact.

After another false dawn when Stanley found the wall in turn four, the big race of the night did eventually get under way, with Blackman taking it up from his now lonely front row start. Woolsey dropped in behind ahead of Simpson. Kew was initially fourth, but an early clash of wheels had damaged his suspension and he careered headlong into the turn three wall. As if that wasn’t bad enough for Jason, the car would be collected very hard indeed later on by Steve Burrows, causing considerable damage.

The top three were circulating as one, with Simpson even looking alongside Woolsey’s outside at times. They were soon joined by Murphy and then Boardley, and the race was most definitely on. Woolsey was trying everything he knew to force Blackman into a mistake, but Malcolm was holding firm. Exiting turn two, a touch from Woolsey seemed to create the slightest of gaps, and when Gary went for it, the net result was Blackman spinning onto the infield and out of the race. In the midst of it all, Simpson took up the running from Woolsey, but Gary was immediately issued with a black flag for the demise of Blackman.

Despite numerous warnings over the Raceceiver system, Woolsey chose to ignore the signals and continued in the race.  As he was running between Simpson and the now second place man Boardley, the Steward had no option but to neutralise the race under yellows to remove him from the track.  Unfortunately for Simpson, this brought Boardley nicely onto his tail, and it was most certainly game on for the rest of the race.

The top two quickly pulled clear of the rest, with nothing between them at all. Further back, Christie was on another of his stormers after a poor qualification, relegating Cooney, David C, Andy H and Martin in quick succession to grab fourth.