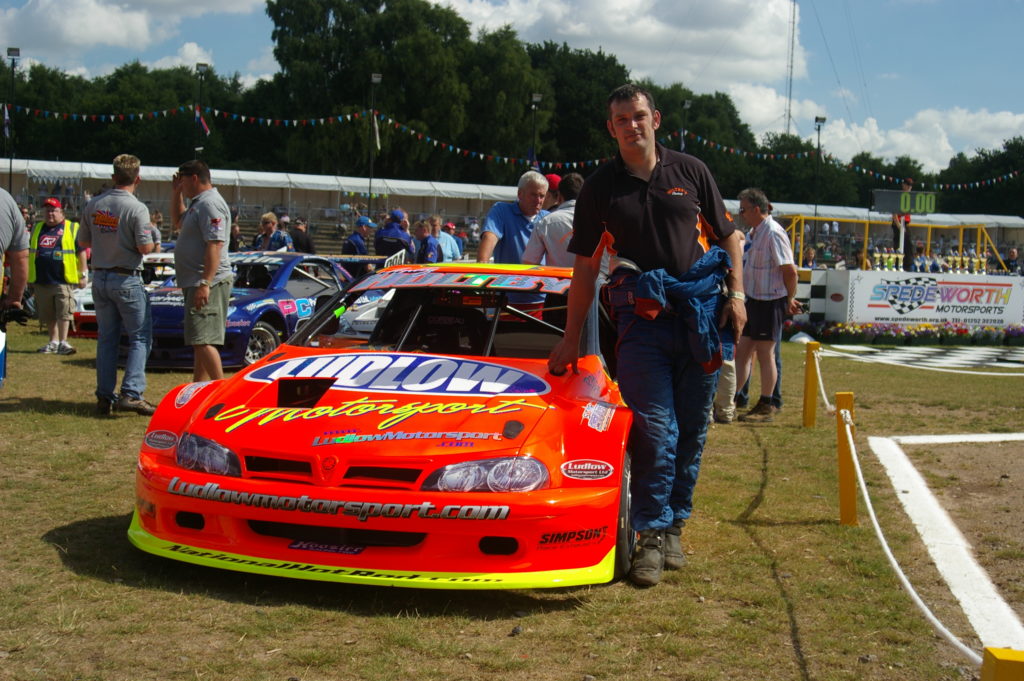 NHRPA National Hot Rod 2009 British Open Championship
Andy Holtby – 2009 British Champion
Nuttscorner Oval. Sunday 6th September 2009
Story – Darren Black:  Not many English drivers can say they’ve won a major National Hot Rod title on Ulster soil, but Andy Holtby added his name to that list when he dominated the 2009 British Championship at Nuttscorner Oval on Sunday. On a day when the weather and track conditions just never played ball at all, Holtby steered his Tigra home to the chequered flag (and roof) ahead of local charger Glenn Bell and Malcolm Blackman.

Only 22 cars were available after Saturday’s bruising encounter at Ballymena, with the most notable absentee being John Christie, who would no doubt have been one of the hot favourites for the title. Of those who were on hand, it was most certainly a cosmopolitan entry from all corners of the British Isles. Amongst the eleven strong local contingent were the newly crowned Irish Open Champion Keith Martin, and the now two-time World Champion in the 2.0 Hot Rods, Wayne Woolsey. Wayne was quickly back in the groove as one would expect, behind the wheel of brother Gary’s older McCall-built Corsa. Damien Mulvey and Les Compelli represented the Republic, whilst Messrs. Blackman, Holtby, Simpson (x2), Brooks, Haird, Hillard and Burrows had made the trip from England. That just left lone Scot Wullie Hardie, who spent the weekend endearing himself to the locals in a Northern Ireland football top, and on such a crucial World Cup Qualifying weekend too! Welcome to the Green and White Army Wullie!

Brooks had been drawn on the front row for heat one, but he decided that with track conditions as they were that he would start off the rear. That left Mark Heatrick to slot his Mercedes into the early lead from defending champion Gary Woolsey. Woolsey got quite a surprise when Dick Hillard slid past him into second, the veteran looking more than handy with conditions tricky underfoot.

Matt Simpson, Holtby and Wayne Woolsey were all looking relatively sharp as they progressed forwards, whilst at the front Heatrick still held sway with Hillard now under pressure for second. As Gary W looked outside Dick to no avail, Chris Haird got under him, but when Dick was blue flagged to hold a better line to his credit he did so immediately. This only succeeded in giving Gary W the opportunity to make his high-line pass stick for good this time, and with it runner-up slot behind Heatrick. Hillard held on for third from Haird, Wayne W, and Holtby, who set the fastest lap time of the race.

The reverse grid second encounter paired Davy McKay alongside Glenn Bell on the front row, and with Davy much more at home now in his Tigra, he set off into the early lead. Malcolm Blackman was the big danger here, the experienced Englishman having coped with tracks like this many times in his long and varied career. He soon got under both those ahead to take up the running, whilst Terry Maxwell was having one of his best runs ever as he circulated solidly in fourth.

Holtby was again one of those catching the eye, powering past Tommy Maxwell with the #61 car sometimes still sideways as it passed the start/finish line. They say if you’re going sideways you ain’t going forward, but Andy was doing both quite well thanks very much!! Matt Simpson got around Hardie to chase after the front runners too, and many watched with bated breath as his father Jeff was next to have a go at the Scotsman given their recent history. It came to nought though as Hardie retired, ultimately for the day, and attention now switched to an enthralling battle between the Woolsey duo and Haird.

Gary W switched to the outside line to take brother Wayne, and it actually looked as though Wayne checked up into turn three to allow him to complete the move. But Gary seemed to cut in too early, suffering a glancing blow on his back right corner which in the conditions saw the #940 Tigra pirouette into the wall. I’m not sure what was said afterwards in the pits, but the words “a fly”, “wall” and “love to be” were certainly heard in many quarters! Gary did try to continue but to no avail, and with it his hopes of retaining the British were all but gone.

As Blackman continued to lead, another incident at turn three with three to go saw Brooks and Tommy M come together, and when another couple joined the party the reds were aired and the race declared. Blackman took the trophy, from Bell, McKay and Holtby.

When the calculations had been completed Holtby had pole for the British final with Blackman alongside, whilst Heatrick and Bell shared row two ahead of Wayne W and Haird. Gary W and the NW team had got his Tigra back out to defend his title, but all was far from right with the car which would eventually be sent across to Ludlow’s at the end of the meeting with the visitors for repairs. The rolling lap was far from exemplary, but it all fell into place just as they approached turn three and the greens were out and the race was on.

I’m sure Blackman was thinking the start was his real chance to nose ahead, but Holtby executed it perfectly to settle into the lead. Blackman slotted in behind ahead of Bell, as Heatrick and Haird had a set-to for fourth, swapping the position a couple of times before Chris settled ahead but with a black cross for his troubles.

Holtby continued to lead, and as we neared half distance the local crowd became more vocal as Bell got under Blackman to go second. At the edge of the top five Hillard and Wayne W traded paint, with Wayne taking the place, but soon after half distance he was out. The man making most strides forward at this stage was 2007 champion Stewart Doak, who was banging in quick lap after quick lap and gaining positions hand over fist from his eighth row start. He was slowed when his attempts on Terry Maxwell almost turned ugly, but was soon through and off in search of more places.

Bell was by now wringing the neck of his 206cc, and giving it everything in pursuit of the leader. Despite closing the gap down as the laps ran out, Holtby was always in control and crowned his fine afternoon with the chequered flag and a well deserved first title. Bell can only be pleased with the runner-up slot, his second in the last three majors. Blackman took the final trophy, ahead of Haird who went unpunished, Heatrick, Doak and Gary W with Steve Burrows rounding out the top 8 in only his first few months in the class.

Whilst the weather had tried its best to ruin the occasion, nothing can detract from an excellent performance from Andy Holtby, who I’m sure will wear the black and white chequers with pride for the next twelve months. If he can do that on his first Ulster visit, who knows what he’s capable of when he gets a few under his belt!