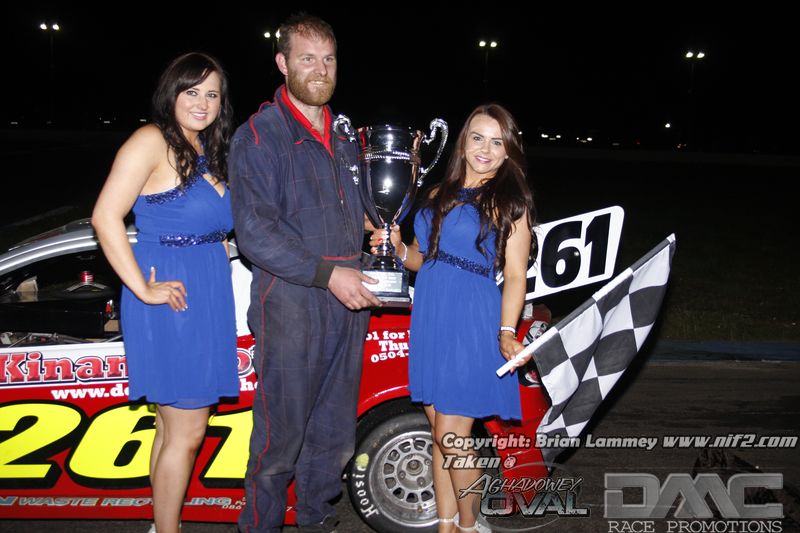 Darren Black reports:  David Casey took a polished victory in a bruising National Hot Rods British Championship encounter at Aghadowey Oval at the weekend, emulating the win of his father Tom in the same event back in 2012 at Ballymena. David also landed a heat win on his way to pole position for the British final, with Adam Maxwell the other winner during qualifying.

For a number of reasons the entry was well down on numbers from a year previous, but what it lacked in quantity was certainly made up for in quality with all the major champions in action. World Champion Shane Murphy made the trek almost the length of the island of Ireland to Aghadowey to take part, and was joined on the trip north by regular visitors Casey, Les Compelli and Garry Kelly, with Damien Mulvey joining in this time around too.

Crossing the Irish Sea was rapid Scot Robert McDonald, with English stars Jason Kew and Billy Wood also in attendance. Amongst the local entry which brought the total up to 22 cars was a welcome return for John Christie in his Tigra, whilst Andy Stewart had reverted to his RCE 206cc as opposed to the older Tigra which he had used in recent World Series NI rounds.

Casey set the early pace in the opening heat from his drawn position of pole, defending hard from reigning British title holder Glenn Bell once he had worked his way past Gary Wilson and the other front row starter, National Champion Gary Woolsey. There was an early caution period when Derek Martin came to a halt in a precarious position on turn two, with Casey leading from Bell, Wilson, Woolsey, Jaimie McCurdy and McDonald at the restart.

As Bell piled the pressure on the leader, Casey dropped the pace and began to defend his inside line. That saw a queue begin to develop until the inevitable happened. It all kicked off on the Brown Trout Bend with Wood nearly spinning after a hard hit from behind, whilst World Champion Shane Murphy did get spun as the whole pack concertina’d up. Unfortunately for Shane his stationary car was then collected by fellow Tipperary racer Kelly, with meeting sponsor Thomas Dilly and Nigel McCauley also dealing the #970 machine glancing blows. The yellows were required once again to clear up this sorry mess.

Having had the whole field breathing down his neck prior to the stoppage, Casey was able to break free at the restart with just Bell for company this time. Glenn was all over him like the proverbial cheap suit, but just not able to find enough to get past. John Christie received a technical disqualification for a flapping bonnet no doubt caused in the earlier incident involving Murphy, but that was the least of John’s worries as a broken valve spring would mean that was the last we’d see of the former World Champion for the weekend.

Bell drew alongside Casey on the run to the chequered flag as they got embroiled with backmarkers Dilly & Kew (who had spun earlier), with Wilson very good value in third. Woolsey ended up in a fourth place he would later lose, whilst an impressive McCurdy, McDonald and Wood were next home.

Thomas Dilly headed heat two in his Mercedes SLK, despite pressure from Adam Maxwell right from the off. Maxwell was constantly looking for the pass on the notoriously difficult outside line, but Dilly was thwarting his every move. In the pack Jason Kew got punted into a spin, which would ultimately earn Mark Heatrick a disqualification, as the battle intensified at the front. Maxwell finally got the better of Dilly after their enthralling dice to take up the running, before a huge home straight accident involving Derek Martin, Bell and McCurdy brought about another caution. Dilly had got out of shape ever so slightly going onto the back straight, with McCauley and Derek Martin immediately darting to his outside. McCauley made it three abreast only to try to drop behind Dilly again around the Brown Trout Bend when Keith Martin was already in that gap. The resultant contact saw Nigel go left into Derek M, who smacked the barrier and then with broken steering came back across the onrushing pack. How only Bell and McCurdy got involved is anyone’s guess, but Derek was left with a very badly damaged car indeed.

Maxwell made off at the restart and took the win despite another caution when Murphy was left stranded hard in the wall on the exit of turn two. Martin finally broke down Dilly’s defences, and Thomas’ resolute rearguard action of what was now third came to nothing when a half shaft problem saw him retire in the closing stages. Keith M took the runner up position ahead of McCauley, Wood and Stewart Doak.

Casey and Billy Wood shared the front row for the British final, ahead of Maxwell and former champion Keith Martin on row two. Casey immediately stepped into the lead with Maxwell settling into second, and quickly piling the pressure on the lead car. An untidy clash between McDonald and Woolsey put paid to their chances, and would later lead to Wolsey being loaded up pending further disciplinary action from the NHRPA. Many eyes were on defending champ Bell who got himself past Wood and Doak to now run third – all this from ninth on the grid and very early on too! All the while the battle between Casey and Maxwell was raging at the front, but Bell had now pulled himself right into contention too and we were only at half distance…