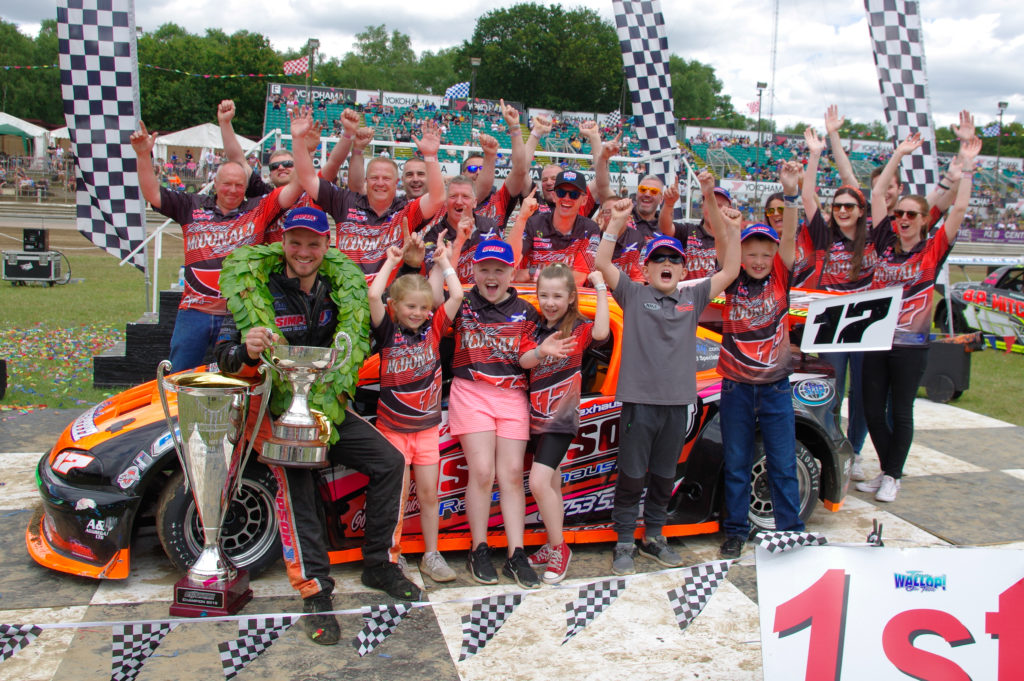 It’s taken 47 years but a Scotsman has finally won the National Hot Rod World, Rob McDonald qualifying on pole before going on to dominate the race. Three time winner Chris Haird chased hard every inch of the way but, in the end, the English World Series winner could never quite get on terms with the man he narrowly beat in that points race. Having missed the event last year, David Casey came back with another podium placing – his third- after a race long battle with Jack Blood.

Although Saturday morning’s Hot Laps grid qualifying can sometimes seem a touch mundane, there was none of that this year. Drivers continued to punch in faster and faster times throughout, leaving pole in doubt until the very end, Casey’s outside front row best coming in literally the very last lap of the session.

The first really quick looking time came as soon as second-car-to-run Gary Woolsey recorded a 14.48. And in fact 14-anything did prove to be highly respectable, but with many drivers in that zone. When Haird notched up a 14.40 dead it did look as though that might be pole right there, but that reckoned without McDonald’s blisteringly fast 14.30 or indeed Casey’s last ditch14.37 effort. In the end Haird had to rely on his second best lap to stop Shane Bland ousting him from P3 on the grid.

McDonald may have got his hands on that pole start at last, but with twice runner-up Casey alongside, three time winner Haird right behind and then 2012 winner Glenn Bell, and reigning champion Billy Wood all nearby and only 0.56s covering the entire grid, there was going to be nothing easy about this.

With Hot Laps having determined the starting order of 34 of the 35 starters, there remained just the business of deciding who would join the back of the grid as the ‘wildcard’.

Those races provided heat wins for Gordon Alexander and Brendan O’Connell, with Alexander taking that last grid slot pretty much unopposed from flag to flag in a very wet final.

The track was dusty at the start, due to the dirt which had found its way onto the circuit during the downpours the previous evening. Still though, that didn’t actually seem to be a contributory factor to an almost immediate race-stopping crash involving Roy Anderson and Winnie Holtmanns. Although the traditional time for repairs was allowed neither man was able to take the restart.

That first attempt had seen McDonald make a flawless getaway, a feat he was able to repeat exactly for the restart. As Bell went spinning into the wall the rest settled down with Casey running second ahead of Blood, Jason Kew, Shane Bland and Adam Hylands. Blood’s car was trailing smoke for a time but the smoke eventually ceased.

Up front McDonald had his head down and concentration control turned up as he began to eke out a steadily growing gap over the second place dice between Casey and Haird. And with the leader beginning to march away, it was clear Haird needed to get past the Irishman sooner rather than later. A dart up the inside into turn one put him into second with a clear path to the leader who was still not that far in front. And with the first real clumps of backmarkers looming up ahead this was far from over yet.

From this point on the race became an enthralling struggle between the two leaders. McDonald continually had to work hard to maintain his advantage while Haird continually whittled away at it, the gap see-sawing between them according to the vagaries of the traffic.

As the laps inexorably ticked away the leader could never quite put it beyond doubt and, when they got the 10 lap board, Haird was still close enough to be a worry if McDonald struck any kind of problem – and then he did. First, a brush with Carl Sloan along the home straight as Sloan went a lap down provided a scare. And then McDonald found the backmarkers right ahead of him were Wood and Bland, squabbling over sixth place, and running side by side as they had been for a while. By the time they realised the leader was behind them, he’d been boxed in for more than a lap. The situation was just what Haird had needed many laps earlier, but now it didn’t look as though he had anything left with which to turn it to his advantage. And when the lapped cars stepped aside and allowed McDonald to wriggle past them, he actually ended up gaining out the situation rather than losing.

It turned out to be the winning manoeuvre.

With four laps to go, it was effectively all over and the Scot was soon tearing past the chequered flag to do the thing so many had threatened before him but never quite managed – a first ever Scottish World Final victory.