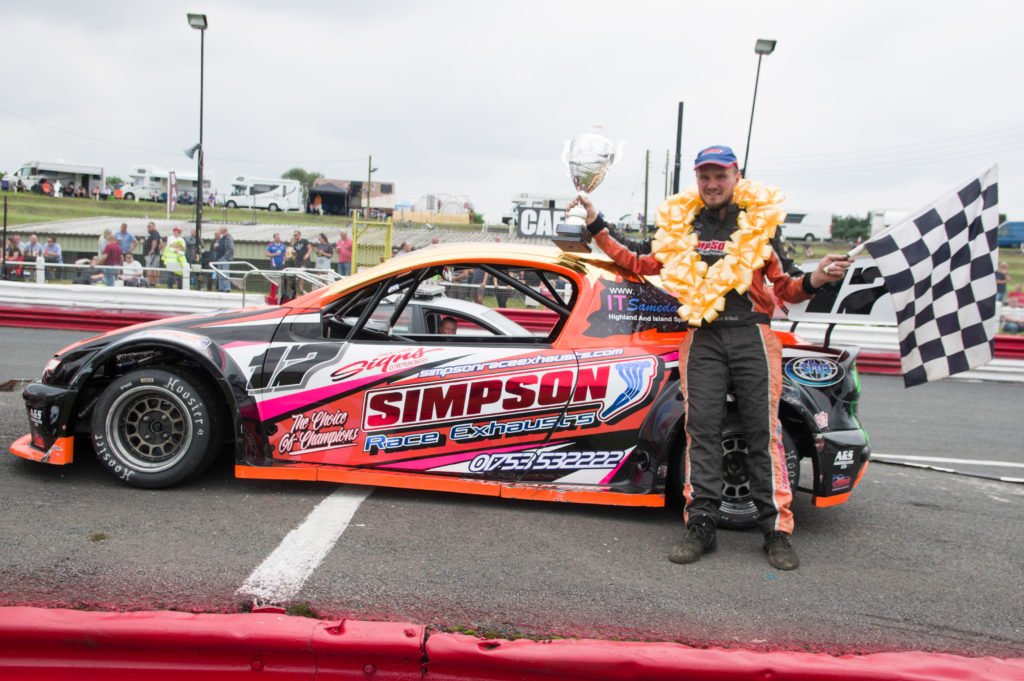 It has almost become traditional that the still-new world champion will take the National as well and Rob McDonald proved equal to the task, passing long-time leader Jack Blood after a caution period had robbed Blood of his brakes.

Carl Sloan went straight into the lead at the start of the third encounter but had to fend off the fast finishing Adam Hylands, the 2016 champion looking for a second win. Sloan remained calm however, and was still just in front at flag fall.

Heat four was already gridded up on slicks when a heavy rain shower arrived. A predictably damaging race followed, providing a catalogue of spins and crashes which would have filled a book. John Christie has shown in the past that he likes a wet Hednesford and led this one comfortably from flag to flag.

The fifth race was another flag-to-flag job, this time for Rob McDonald, although he was tested in the early going by both Glenn Bell and Kym Weaver.

The last heat was crucial for several drivers in terms of grid position and also who would claim pole. Haird had an earlier non-finish and needed big points from this, while any half decent result for Hylands would net him pole. But when Terry Hunn failed to move at the green and got collected by Hylands, that left Christie and the consistently quick Jack Blood vying for pole instead. Haird duly took the win, while Blood got the number one starting slot with McDonald alongside.

A side by side first lap clinch between the front row men eventually went Blood’s way, the pair almost immediately putting daylight between themselves and the rest. Behind them however, the opening laps were a frantic exchange of places. Haird relegated Carl Waller-Barrett, then Bell darted under Christie to snatch away third, Christie going backwards as Adam Maxwell and Martin forced their way past as well.

Haird continued claiming victims to move up to fourth, while Billy Wood was doing much the same but further back, Martin having to give best to both men.

With backmarkers looming for the leaders, McDonald made his first overtures about passing Blood, while Bell was now fending off an insistent Haird. Haird had just got ahead and into third when the yellows came out for Alistair Lowe who was in the wall on the West Bend exit.

This caution period was the pivotal moment of the entire 75 laps.

The Haird-Bell dice had been catching the leaders prior to the hiatus and it looked as though closing them all up had played right into Haird’s hands. But his car was nearly out of brakes and it wasn’t the only one. When the green flag came back out Blood sailed way past the turn-in point for the East Bend, handing McDonald both an empty inside line and the lead.

There were still 25 laps to run at this point but it was effectively all over. All three lead cars had heat-soaked their brakes away and were just in the business of keeping going over the remaining distance. The leader had lapped everyone up to fifth by flag fall, McDonald’s car also stopping at the winner’s rostrum with virtually zero brakes.