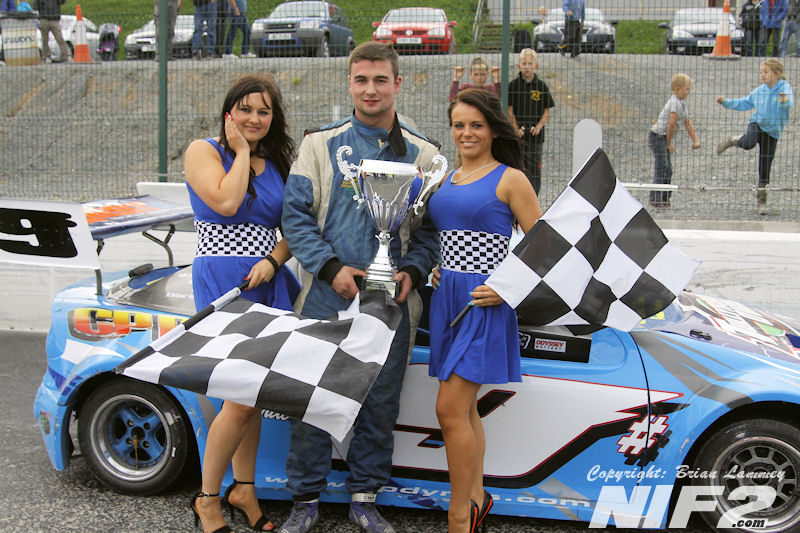 Having relinquished his World and National Championship crowns in recent weeks, Portadown’s Glenn Bell gave everyone a stark reminder of his undoubted ability when he took a comfortable victory in the 2013 British Championship at Tullyroan Oval on Sunday, September 1st. On an afternoon of wheel to wheel combat, Bell shared the heat honours with fellow Ulsterman Andrew Murray, before claiming a flag to flag win from pole position in the British final.

A cosmopolitan entry of 21 cars arrived at Tullyroan Oval, as the venue which sits right on the border between Counties Armagh and Tyrone staged its first ‘major’ title so to speak. From England came World and National Championship runner up Jason Kew in the Wash ‘n’ Dash Tigra, alongside Kym Weaver, another who showed very well in the National at Hednesford. Veteran campaigner (he’s looked as good to me on track lately as he ever has!) Dick Hillard also made the long haul from the mainland, alongside Scotsman Robert McDonald, whilst a healthy Republic of Ireland contingent was led by defending champion Tom Casey, with Shane Murphy, Mike Riordan, David Casey, Eamon Donovan, Damien Mulvey and Garry Kelly also travelling north, the latter for his first international meeting in the ex-Tubbs O’Connell 206cc.

The draw for heat one put Bell on pole, and he immediately set off at the front ahead of NHRPA Champion Riordan, Kew and the other front row starter Andy Cochrane. Initially the leader was unable to break clear, whilst Keith Martin got under Cochrane to go fourth, trailed by fellow former British Champion Stewart Doak and Weaver.

Robert McDonald, Mark Heatrick and John Christie were all on the move from the second block, with Christie’s attempts to demote Heatrick being badly hampered by the poor outside line and only succeeded in allowing Adam Maxwell under the World title holder.

Riordan was still hanging on behind Bell, as Hillard got turned aside on the back straight after a clash with Mulvey, and Maxwell picked up a black cross for levering Heatrick wide into turn one. Bell did finally get some breathing space as the 25 laps were rounded out, taking an impressive win with Riordan equally good value in second ahead of Kew, Martin, Doak and Weaver.

Simon Kennedy had the front row all to himself for the reversed heat two, but he was helpless to stop David Casey rocketing through from row two to the early lead. Andrew Murray was tracking him right from the off, and when Casey clipped the wall out of turn two Murray seized the opportunity to slip ahead. Murphy chased through behind, and the two would have a battle for the lead for the rest of the race.

There was plenty of argy bargy further back with Maxwell, Christie and Heatrick all over the back of Hillard. It ended in tears when Dick got spun out of it entering the home straight, an incident which saw Christie getting jacked into the air by Heatrick as they all hesitated in the confusion. The melee continued right into turn one, with Kew tagging Weaver and Doak, turning the 996 car right round and involving Riordan and others too. Not surprisingly the yellows were called for, and Kew, Christie and Doak were out whilst Maxwell got an early bath for his part in the proceedings.

They didn’t get too many more laps of green before things were brought up short again when Andy Stewart hit the turn 4 wall very hard indeed, necessitating another caution period. Murray led them away at the restart, with Murphy again in his tyre tracks ahead of Tom Casey, Heatrick and Weaver.

Murray had all in control and took the flag, with Murphy, Tom C, Heatrick, Weaver and Bell next up, the latter having made a telling pass on Martin nearing the end.

The British Championship final saw Bell on pole position with Martin alongside, and then Weaver and Murphy on row two followed by Murray, Heatrick, McDonald and Tom Casey. Bell as expected soon took up the running, with Weaver, Martin and Murray all getting the better of Murphy who got hung out to dry somewhat in the opening exchanges.

As Bell made good his escape, an intriguing battle was developing for second as Weaver, Martin and Murray circulated together with little between them. Christie was making progress from his lowly start, and soon got past Murphy and McDonald before another failed outside attempt on Heatrick allowed Murphy back past the #962 Tigra.

The slightest of errors when passing his running mate Kennedy sent Martin wide into turn one, and that was enough to see Murray slide under him to third and begin the chase after Weaver, who had broken clear in second. Bell was well down the road at this stage, but had a massive problem ahead as he caught up with the fifth place battle which was absolutely raging between Heatrick, Christie, Murphy, McDonald, Doak and Tom Casey. Time and again Christie tried the outside, as did Murphy, but the grip just wasn’t there, and John was even black crossed at a time for persistent ‘love taps’ on Heatrick’s rear as his frustration grew and grew.

Being top drivers in their own right, they all gave leader Bell a clear run through, although his lead was cut to less than a quarter of a lap over Weaver, who had Murray now all over him like the proverbial rash. The laps were running down now, and as they came towards the one to go board amidst heavy traffic, Murray somehow manage to box Weaver in behind the much slower car of Kelly. Contact between the two green cars then saw Kelly tag Murray, who went for a wild slide collecting Weaver on his way past and then spearing both headlong out to the wall where they ended facing the crowd. Martin somehow got around the outside of them both amongst it all on full opposite lock, accepting the gift of second spot.

Almost unnoticed amidst the drama Bell took the double chequers to be crowned British Champion, with Martin half a lap back in second and Heatrick the only other car on the lead lap. As Murray and Weaver sat disconsolately in the wall, Christie, Murphy, Casey, McDonald and Doak were next home. It was a masterclass all day long from the young Portadown ace, and no doubt he will be working hard towards regaining the gold in 2014.