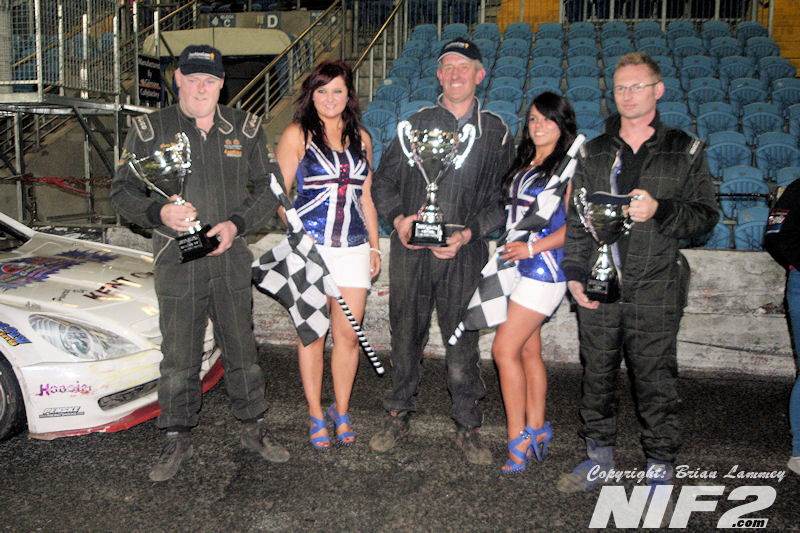 2012 NHRPA British Open Championship
Ballymena Raceway, Saturday 1st September 2012
Darren Black reports: Many thought that his best chance of a major title in National Hot Rod racing had gone following that never to be forgotten moment within sight of the flag in the 2001 World Final, but Tom Casey showed that there’s life in the old dog yet with a determined win in a controversial 2012 British Championship at Ballymena Raceway on Saturday September 1st.

Even though the entry was way down on what was expected by the organisers, the 18 cars present put on an excellent showing as part of the 35th Anniversary meeting at the track. From the mainland came English Champion Chris Haird, National Championship runner-up Jason Kew, and another form man, Gavin Murray. Casey was joined from the Republic of Ireland by ever present traveller Les Compelli, and they joined 13 home drivers to contest the two reverse grid heats before the British Final.

The drawn grid for heat one saw Casey on pole with Murray alongside, and Rab Forsythe and Mark Heatrick lining up on row two. Murray tried all he could to hang on to the outside of the pole man at the greens, with Tom squeezing him as much as he possibly could onto the back straight. This allowed Heatrick into second, with Murray dropping into third spot.

From the second wave of the grid, Stewart Doak and John Christie were already making strides forward, whilst behind World and National Champion Glenn Bell got himself into all sorts of bother on the Fisherwick Bend which saw the gold-roofed Tigra facing the wrong way and with damage on the drivers side. Race Control were keeping tabs on a trailing door when he finally did get going again, but when it seemed to be sorted he was allowed to continue, albeit now at the rear of the field. It later transpired that he had driven the remainder of the race one-handed whilst holding the door closed!

At the front Casey was breaking clear, with Heatrick now fending off Murray, Keith Martin, Haird and Gary Woolsey. In their efforts to join Davy McKay at the back of this train, Doak and Christie traded paint just once too often which led to a black cross for both and a stern warning after the race.

Despite Heatrick closing on the leader in the final tours, Casey held on for the first win of the night ahead of Heatrick, Murray, Martin and Haird. When was the last time two SLK’s locked out the top places in a race at a championship meeting?

With Andy Stewart running all races from the back of the grid as a provisional licence holder, the 17 remaining cars formed the main grid for heat two. What is significant was that those 17 cars obviously left a gap on pole position in the reverse of heat one, and this was to cause all manner of problems.

At the first time of asking Bell was into the gap like a shot as he and many others were away much too early at the green. A red flag was quickly shown for an unsatisfactory start and the cars all lined up once again. This time Bell went early, stopped, and then went on the greens, but by now was half alongside front row man Dilly which earned him a swift black cross.

The first lap was frantic to say the least, as somehow Doak, Tommy Maxwell and Dilly found themselves three abreast rounding the Suffolk Bend. Quite how they got out onto the back straight unscathed given Ballymena’s tight exits remains a mystery, but when they got to the pit gate something had to give into turn three. Unfortunately it was the outside man Dilly, who got turned across Maxwell, and then punted hard the other way and into the wall. With roof panels etc flying off Thomas’ car, it was pleasing to see him quickly signal he was okay and the race continued.

Bell was out front, ahead of Ian McReynolds in his Saxo who was showing very well indeed. Christie and Kew were next up, but the big surprise was that the World Champion was struggling to shake off McReynolds. All soon became clear though, as Glenn spun to a halt on turns 3 and 4 with a back nearside puncture. How ironic that the very man who benefited from a puncture to Woolsey at Hednesford should himself have the same fate put the final nail in the coffin of his hopes at the very next major!

McReynolds was still ahead and holding Christie at bay in a storming drive, whilst Doak in fourth could make little impact on Kew ahead of him. Stewart moved wide and gave Woolsey a chance at our infamous cycle racer(!) but Jason hung on to take third at the flag on his first visit to the circuit. McReynolds had taken the win ahead of Christie, to make it heat one to an unloved SLK, and heat two to a home-built Saxo!

Heatrick had a wild ride down the grass early doors too which did little to help his chances, but Casey settled the Merc into the lead. McReynolds, Woolsey, Christie, Haird and Martin were still in touch, and it was anyone’s race. No disrespect to any of the lead duo, but at this stage had there been a window handy the form book would most definitely have been out it!

Half distance came and went, and whilst overtaking was at a minimum you could almost feel the tension in the air. Murray was making strides forward towards the front pack, and indeed looked the fastest car on track as he slipped under Martin to go sixth.

McReynolds’ great run came to an end soon after, as he ran out of brakes and went deep into turn three. Woolsey now took up the gauntlet of ousting Casey – could he offer more of an offensive approach than McReynolds? Murray meanwhile was catching the eye once more, slipping under Haird and Christie as the #962 and #115 cars were the first to give it a real go on the outside but to no avail.

Woolsey had to go for it as the laps ran down, and a quick look alongside Tom saw Gary think better of it and jam back into the train. Again Christie and Haird had a go, but somehow in the midst of it all Murray got a clout that left bodywork fouling a tyre that would lead to his demise.

As the lap boards came out it was still Casey ahead, and driving the perfect race. At any time of asking from the Steward he held a perfect inside line, knowing all the time that it would be difficult to put the outside pass on him. Woolsey was still second, as again Christie and Haird looked for the wide trip but it just couldn’t be made to stick.

Woolsey again looked outside down the back straight after they had taken 2 to go, but decided that it wasn’t going to work and tried to get back in. Haird had decided he was going for the gap, whilst all the time Casey was being ultra cautious to avoid running wide. The net result was the whole lot of them coming together, with Casey spinning and cars off in all directions. Haird came through ahead, but with Christie challenging – much to the delight of the two grandstands which had erupted. However, the reds were already flying to signal that the result would be declared in Race Control.

After discussions involving all those in the lead bunch, Casey was reinstated to the win and the result taken from the previous lap back under the Girling Rule. No prime or sole cause of the stoppage could be clearly identified, so behind the new British Champion Casey, Woolsey took second ahead of Haird Christie and Martin, with McReynolds’ ailing Saxo, Maxwell and Heatrick completing the top 8. Tom was absolutely delighted with his win, although he did later admit that as he sat facing the wrong way after the skirmish he thought his major title hopes had gone once again. And all this from a man allegedly contemplating retirement…

There followed a special 35th Anniversary Coral Cup race for the Nationals, with an excellent £35 on offer for each lap led. With the grid the reverse of the British, and only 8 cars taking up the challenge, it was no surprise that pole man Bell led all the way to land himself a nice trophy and a cool £700!

To finish the night the Ballymena promotion brought along a few stars of other motorsport disciplines for a challenge race in National Hot Rods kindly loaned by some of the drivers. Most eyes were on WRC star Kris Meeke in the Bell Tigra, with others involved being former MotoGP winner Jeremy McWilliams in the Casey Merc, World Superbikes star Eugene Laverty in the Christie Tigra, Aussie British Superbikes man Josh Brookes in the McKay Tigra and Motocross GP rider Gordon Crockard in the Heatrick SLK. Former NI Sprint and Hillclimb Champion Jackie Harris joined them in the SHP 206 he currently owns, and with the track very greasy from a constant drizzle they all performed well. Meeke in fact was simply stunning, exercising car control that was second to none and setting a blinding pace, as would only be expected of course. Best of the rest was Brookes who took very well to McKay’s Tigra.