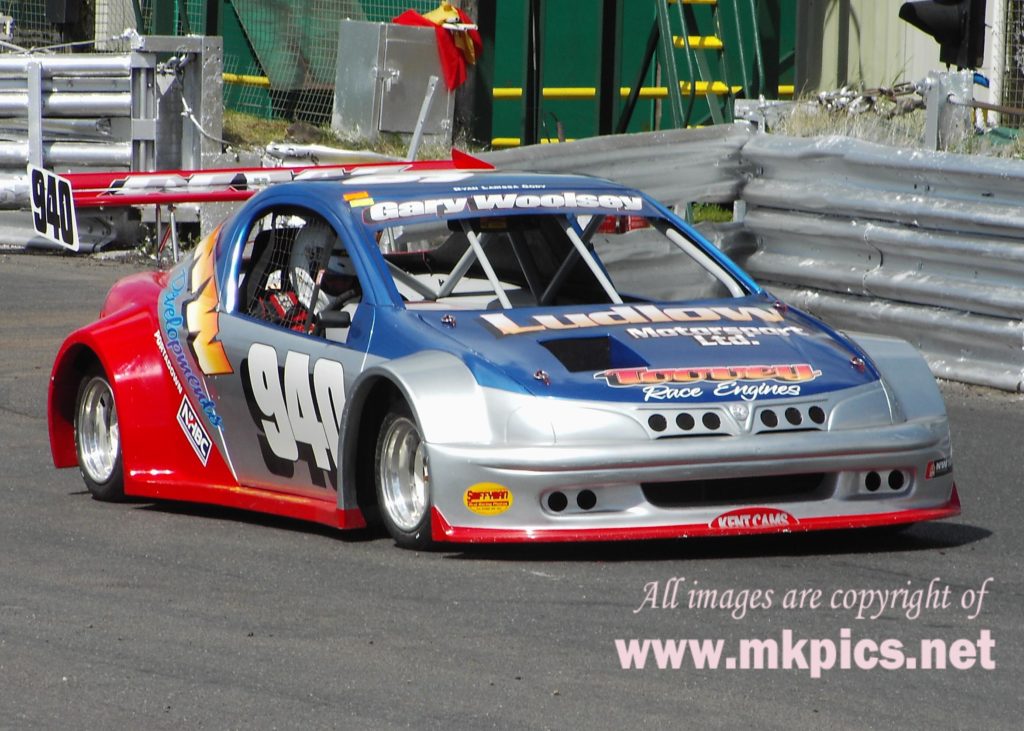 There was a pleasing entry of 24 cars present for the 2008 staging of the British, as the NI weekend once again starts to have a bit of a presence about it and attract some decent fields. Of the travellers, most eyes were fixed on triple World Champion Carl Boardley on his first Tigra-mounted trip to Ballymena, and the car certainly attracted plenty of interest from the enthusiastic Ulster fans in the pits. Joining Carl on the journey across the Irish Sea were perennial visitor Dick Hillard, Stu Carter, Chris Haird (with the VW engine under the bonnet once again), Gavin Murray and former Raceway-favourite Wilson Hamilton, of course now based in the Midlands. Also making the trip, but from Scotland, was Wullie Hardie, who is of course no stranger to Ulster and indeed Ballymena from his Stock Rod and 2.0 Hot Rod past.

There was also a welcome trio from the Republic of Ireland, with ’08 Irish Grand Prix winner Tom Casey being joined by Shane Murphy and Des Cooney in their 206cc’s.

The drama started even before the racing had began in earnest though, as defending British Champion Stewart Doak had his motor part company with its oil pump belt in practice. There was only ever going to be one outcome to that, and that saw a tightened engine and the Cirrus Plastics crew watching from the sidelines – but only after the power unit had been removed ready for a replacement for the following day. Cooney was another in trouble too, but he at least tried to make the heat one grid before pulling to the infield with trouble that would finish his night.

Ronnie McMillan quickly turned his pole start in heat one into the lead ahead of Haird and late entry Hamilton. Outside front row starter Rab Forsythe was trailing lots of ominous looking blue smoke from his Corsa during the warm up laps, and he eventually fell back and withdrew from the action for the weekend.

Dick Hillard soon nipped under Hamilton to go third in his Tigra, a feat repeated by Shane Murphy a few tours later, with the added measure of the back marking Thomas Dilly making it a hairy three-abreast moment for the Tervas 206cc. Interestingly at the same time, Woolsey showed his first signs of what was to come as he nipped under Boardley to go sixth.

Relative newcomer Dilly had pole position for heat two, and actually made an excellent start to lead them off. John Christie settled into second but was soon looking to grab the lead around the outside, before things went horribly wrong entering the home straight. The Dilly 206cc ran very wide exiting turn 4 – a devastated Thomas would later maintain this was due to contact from Mark Heatrick behind – forcing the Christie Tigra into the wall where it would trail right down past the startline before coming to rest minus a wheel and with all other sorts of damage. Dilly was black flagged and loaded up from the meeting as the large crowd in the grandstand vented their anger in his direction as one of their favourite sons had been eliminated for the night .It certainly was not the cut and dried decision many had initially thought…

Heatrick meanwhile, was soon back in the groove at the restart to grab the initiative, ahead of Jason Winning and Jonny Stevenson. Race one winner McMillan’s hopes of a decent final start all but disappeared when he ground to a halt with an intermittent electrical problem of some sort, and he was soon joined on the centre green by former British winner Keith Martin with handling troubles he was finding difficult to trace.

Glenn Bell was making strides forward, nipping under both Stevenson and Winning to go second. Further back, a train of Woolsey, Murray, Casey and Boardley were all moving through at great pace towards the higher points scoring positions, with Tom and Carl soon moving ahead of Gavin in the four-way struggle.

It all went pear-shaped though for Casey soon after, as a very robust manoeuvre up the inside of Davy McKay when there didn’t really seem to be room saw the two clash. As McKay speared off onto the grass and retirement, he clipped Casey sending the Corrado back across the track where it came to rest against the wall facing the oncoming traffic. Bad memories of Keith Martin and Jock Burgoyne at Hednesford a number of years ago came flooding back, but good marshalling and the Raceceiver system meant Tom fortunately escaped unscathed this time as we went under waved yellow caution flags.

As Heatrick led them back to green from Bell, Woolsey and Boardley quickly demoted Winning and Stevenson to give chase, before another incident at turn 3. Somehow Hardie, Hillard and Carter all tripped over each other, with Hardie and Hillard both going around; Dick with another of the heart-stopping inside-out spins after touching the grass. Fortunately again they were all able to resume.

When the points were totted up, Woolsey had netted pole spot for the British final, with surprise packet Murphy alongside. English stars Haird and Boardley sat menacingly on row two, with young Ulster chargers Heatrick and Bell making up row three. It was however a depleted field that came under starters orders for the 50-lap showdown for a number of reasons.

As Woolsey executed the clutch start to perfection to lead them away, Bell had done even better as he cut in ahead of Heatrick and under Boardley into turn one, to end up in third spot behind Haird, as Murphy completely fluffed a favourable grid in a major not for the first time to end up in eighth spot after just a couple of tours.

The top three were pulling clear, leaving Boardley to attempt to find a way past the stubborn Heatrick, whilst next up was a tight four-way battle between Murray, Murphy, McMillan and Hillard. Murray survived a massive tank-slapper down the home straight whilst under pressure at the time from Hillard, but pressed on regardless.

As Bell had Haird under the cosh, Woolsey was beginning to eke out a bit of a lead. The crowd were soon on their feet as Bell got under Haird to go second – Glenn most certainly a Ballymena favourite given his Stock Rod history and two World title wins at the Showgrounds track. To all intents and purposes it looked as though he could run the leader down, but almost as soon as he made second his own, a blue oil haze began from the rear of the 206cc. Oil was leaking onto his tyres, and he quickly had to divert his attentions back to Haird as opposed to Woolsey.

As Boardley retired from fifth after a frustrating battle with Heatrick, Bell could hold Haird back no longer, and the Cambridgeshire driver nipped back up to second, but still the most of a straight behind leader Woolsey. That looked to be that, but that was without figuring the backmarking trio of Stevenson, McKay and Alvin Christie into things…

As Woolsey approached them the laps were running out and grip was at a premium with Bell still laying down oil. The trio were engrossed in their own battle, and though they sorted themselves out with some vigorous blue flags from Mr Starter and no doubt communication over the Raceceiver system, in an instant Woolsey’s lead was gone and Haird was right on the rear bumper of the NW Developments machine. He very, very nearly got underneath Gary out onto the back straight, but the Thunder 500 winner thwarted his efforts to bring it home for his third British Championship success following wins in 2002 and 2003 – although Gary would want to argue that it’s his fourth success following his controversial disqualification back in 2000 after a post race skirmish with John Steward. Haird was very good value in second spot, with Bell making the podium in his first championship event despite his problems. Heatrick, Hillard and Murphy completed the top six.
British Championship Result: 940 – 115 – 9 – 960 – 31 – 970 – 95 – 944 – 983 – 888.  Darren Black