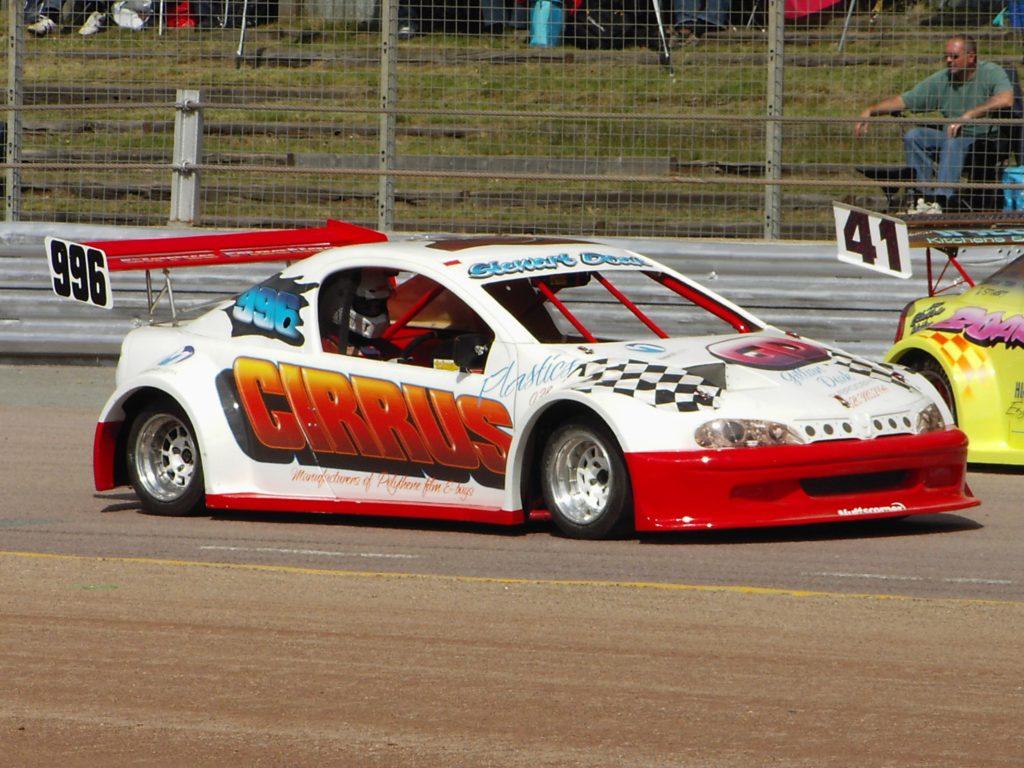 Darren Black reports:  Stewart Doak was crowned British Open Champion at Nuttscorner Oval when he powered his still-new Tigra to victory in the 50 lap showdown. Gary Woolsey and Malcolm Blackman had earlier claimed the heat wins, although Doak’s brace of third places saw him start the big race from pole position.

After the previous days racing at Ballymena, there were only 16 cars on hand for the British. It could have been more, with a further three in the pits failing to grid for any races at all. Matt Simpson had dropped a valve in practice, Les Compelli was suffering engines woes too, whilst Ronnie McMillan tried his car in practice, but his knee injury was still just too painful to consider any serious racing.

Blackman was making strides towards the front from his lowly start position, but everyone was then brought up short by a waved yellow flag period when Ivan McMillan and Dick Hillard (feeling much better after his Saturday illness) clashed exiting turn four. Woolsey made good his escape on the resumption of the race, coming home for the win ahead of Martin, Doak, Christie, Republic of Ireland visitor Mike Riordan and Blackman.
Result: 940 Gary Woolsey, 994, 996, 962, 142, 911, 115, 967, 960, 85, 369, 31, 980.

McKinstry was again first to show at the second time of asking, but Blackman soon slipped underneath for the lead, and was soon followed by the rapid looking Riordan, although Mike did pick up a black cross in the process. Doak was again making real progress, with the Tigra really looking the part, and he easily took Chris Haird to go third nearing the end. Blackman came home to the chequers ahead of Riordan, who went un-penalised, Doak, Haird and McKinstry, whilst further back Christie somehow got underneath Martin on the last lap for eighth spot.
Result: 911 Malcolm Blackman, 142, 996, 115, 21, 946, 940, 962, 994, 960, 31, 980.

Final
996  142 994  962 31   21    946
911  940 115  960 980  967 369
Two third places had gained Doak pole for the 50-lap title race, with Blackman alongside and Riordan and Woolsey behind. The start was always going to be important, and Doak got it bang on to lead them away. Blackman couldn’t find a gap at all, and struggled to get back in, with Gary Woolsey also losing out big style too. Riordan was now second, and was putting up a serious bid for Doak’s lead. Having tracked Stewart for a while, he then looked outside of the similar Cirrus Plastics car. It was almost as if Mike had forgotten about those behind, as in an instant he was back to fifth and the train dropped underneath him.

Doak was now beginning to edge clear once again; with mechanical gremlins the only thing that looked like depriving him of a famous victory. Riordan was starting to make moves towards the front again, although he collected a black cross as he bumped his way under Christie in turn three. Martin then had damper problems, and he fell right off the pace as Doak took the chequered flag and a major title on just the second serious weekend of competition for the Tigra. Stewart says there is more to come from his new machine too! Blackman was a very gallant runner-up, whilst third across the line Riordan was docked two places to fifth. This allowed Christie to add third in the British Open to his third in the World, with Martin inheriting fourth. Behind Riordan, Gary Woolsey, Ivan McMillan, Mark Heatrick and Neville Stanley completed the runners.
Result: 996 Stewart Doak, 911, 962, 994, 142, 940, 946, 960, 967.  Darren Black