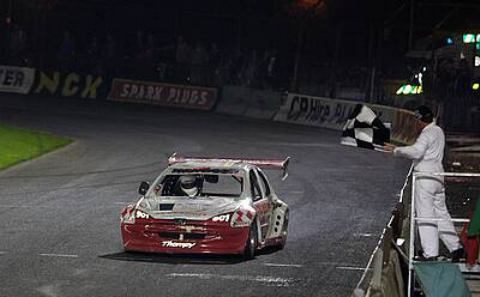 Darren Black reports: Ian Thompson continued the excellent start to his National Hot Rod career when he took the spoils in the British Open Championship staged over Nutts Corner Oval and Ballymena Raceway on September 2/3. Consistency over the five qualifying heats gained Thompson pole position for the final and he never looked back to record a commanding victory ahead of Stewart Doak and Malcolm Blackman.

A good entry of 17 cars competed over the weekend, with the visitors headed by European Champion Blackman, who had Chris Haird, Dick Hillard and Wilson Hamilton for company from England. From the Republic of Ireland came a quintet of Tom Casey, Des Cooney, Joey Butler, Mike Riordan and Les Compelli, while the local entry was boosted by the return of defending champion Clive Richardson. Three all in heats would be raced at Nutts Corner Oval, before a further two and the final at Ballymena.

Heat 4
<  31  911  940 115  50    901 177
<  980 996 904  142 961  994 921
On to Ballymena for a further two heats, and Hillard was looking to capitalise again with a front row draw. Christie, Butler and Richardson were absent, so we were down to just 14 cars for the nights racing. Dick duly led them away, while a slow starting Will Scott baulked points leader Doak. Stewart really needed to get to the inside as he fell back, but his efforts to cut in front of Wilson Hamilton saw him get bumped into a spin, which gave the waved yellows an airing. Hillard was still ahead, but had Blackman, Gary W and Haird right with him, but none prepared to risk anything on the infamous Ballymena outside line. Further back Wayne W and Thompson were having a real ding-dong battle, Wayne no doubt incensed that Ian had possibly used the grass to get inside him at the start. Wayne was all over Thompson, but when he looked wide for the pass he only succeeded in letting Martin through instead. Hillard held on for another good win from Blackman, Gary W, Haird and Casey.
Result: 31, 911, 940, 115, 961, 901, 994, 50, 996, 921, 142, 980, 177.

2005 British Open Championship Final
< 901  911 940  921 961  980
< 996  115 31   994  177 50
Thompson made no mistake at the start of the big race, and duly took up the front running position. A slow starting Blackman allowed Doak to get to the all important inside line in second, and back in the field a coming together saw Haird, Cooney, Casey and Hillard all lose valuable time. Doak was giving it all he had, but just had no answer to Thompson, who gradually pulled out a gap that would be the length of a straight by flag fall. Stewart withstood a bit of heat from Blackman initially before making second his own. Casey and Les Compelli both retired, and Hillard spun on to the infield, but nothing could stop Thompson from taking his second major title in a month, and all this just a few short months into his National Hot Rod career. Doak claimed a fine second, ahead of Blackman and Gary W. Martin had a lonely race to fifth, ahead of Wayne W, who nursed a very sick car for most of the final to sixth, Cooney and Haird.
2005 British Open Championship Result: 901, 996, 911, 940, 994, 50, 921, 115, 980.